Rural hospitals in America are closing at an alarming rate.

In February, Rural Health Voices put the number at 98 closures since 2010, Becker’s Healthcare counted 102 as of March, and the North Carolina Rural Health Research Program lists 155 hospital closures. (The differences depend on the date of publication, as well as how “rural” and “hospital” are defined.)

The number of closures will climb in the next few months. Currently, 46% of rural hospitals are operating at a loss- 700 are at risk of closing as I write this.

Hospitals are closing in urban America also- with a disproportionate impact on minority populations and the poor- but there are unique challenges when a hospital closure is in a small town.

The trend in rural America has significant implications for the patients in those communities, the regions they represent, and the health of our country overall.

What Happens to Patients When A Rural Hospital Closes?

There are numerous ways patients in rural America are put at risk when their local hospital closes. Here are just a few: 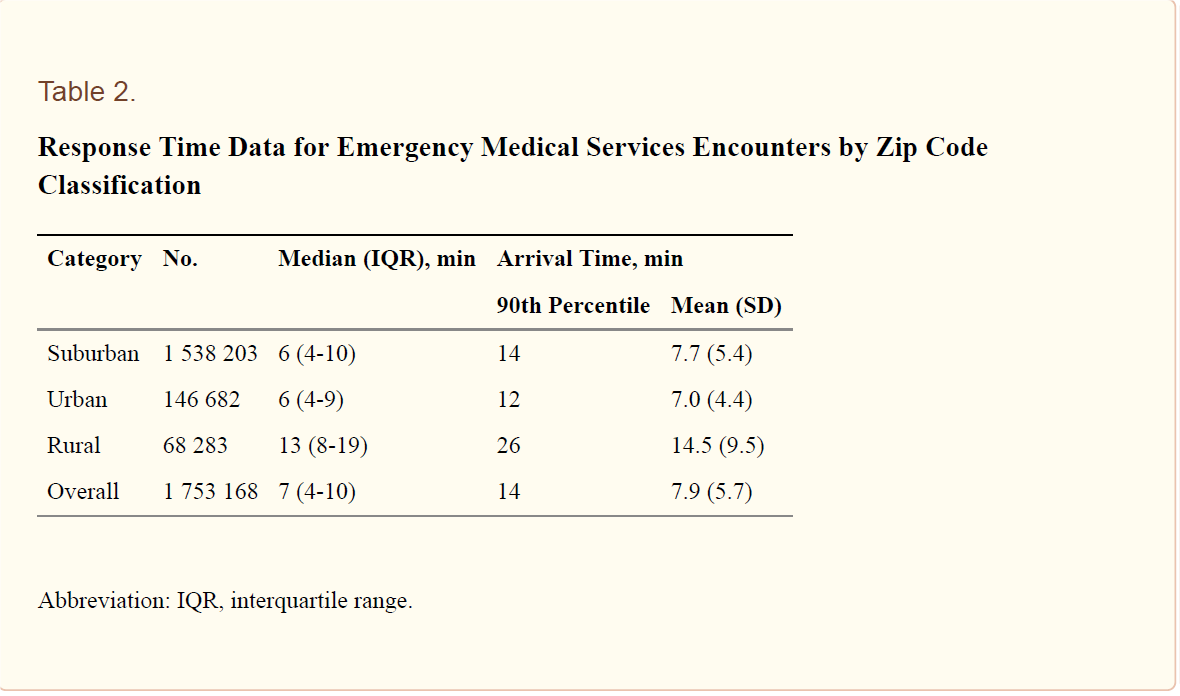 In sum- more rural Americans are dying than people in populated areas– and the rural-urban health gap is worsening.

What Happens to Rural Communities When their Hospital Closes?

Not only patients are dying for lack of a hospital in rural America- whole communities are dying too.

In small towns, a hospital will almost invariably be one of the two biggest employers (the other being the local public-school system.) When the hospital closes- the jobs go away too.

A recent study of the 2,045 rural hospitals in America showed 21% at a high risk of closure- for a total of 150,000 employees at risk as well as $21.2 billion in total patient revenue a year. When a hospital closes per capita income falls 4%, and the unemployment rate rises 1.6 percentage points (if not a lot more). [resource]

As hospital services vanish- so too do specialty physician in small communities; primary care doctors may leave as their referral system decreases and medical malpractice premiums tend to rise. [resource]

The loss of the only hospital in town will inevitably lead to a decline in health services generally.

The death of a rural hospital often equates to the destruction of the town’s economic future.

Why are Rural Hospitals Closing?

The causes of the loss of hospitals in rural America are multi-faceted.

The recession of 2008 – 2009 was unsustainable for some hospitals on the brink. The shift in our population from rural to urban areas (and particularly suburban settings) continues. In this past decade, payers (including Medicare) have emphasized outpatient care over inpatient– and new models of care delivery (such as ACOs) may have contributed to the decline of hospitals everywhere.

At the same time- I should clarify that these closures are not due to the significant consolidation in the industry in recent years– the definition of “closed hospital” used in these studies does not include hospitals that merged or were sold to another hospital or system.

The Role of Medicaid Expansion

Although rural hospitals are suffering a “death by a thousand cuts,” the connection between a state’s decision to expand Medicaid and the fate of that state’s rural hospitals cannot be discounted.

Medicaid Expansion under the Affordable Care Act [“Obamacare”] has become increasingly popular among the states, 37 states have now taken that option (up from the original 26).

States that expanded Medicaid have experienced a “reduction in uncompensated charity care and a reduction in the number, or the velocity, of the rural hospital closures.” [quote]

The connection between Medicaid Expansion and hospital closures was demonstrated as early as 2014 by the Georgetown University Health Policy Institute: 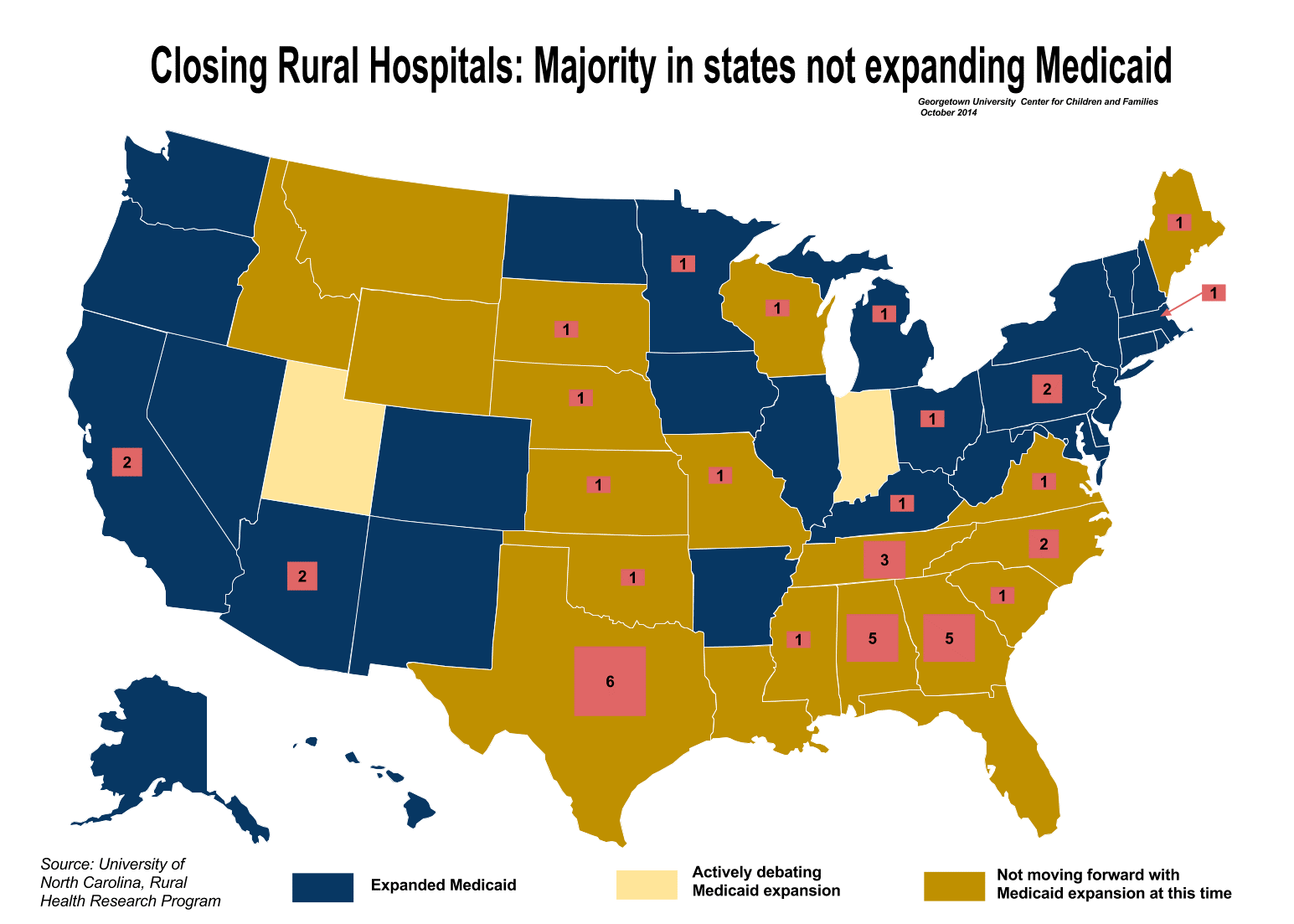 We cannot sustain a country where 60 million people (1 in 5 Americans) do not have access to adequate healthcare.

Rural America is facing an enormous crisis with many causes- the solutions need to be just as significant.

A national focus on the problems of cost, funding, and universal access will help all Americans; the National Advisory Committee on Rural Health and Human Services has specific proposals for what the Federal government could do to save rural healthcare [see those recommendations here.]

State governments must also take action to improve access for their smallest towns- and consider all possible solutions– including Medicaid expansion- even if doing so is politically risky.

And of course, rural towns must help save their hospitals- through local support, community leadership, utilizing those resources close to home, and advocating for their local healthcare providers with both their state & federal governments.

We are in a national debate about what the future of American healthcare should be. Beyond our next election (regardless of who wins) we are guaranteed to have disruption of our system- we are likely facing another decade of uncertainty.

My point is this. Rural America can’t wait.

1.  As hospitals close the necessity of helicopter ambulances increases. There are more than 550,000 Air Ambulance flights a year but at a significant cost. A recent national study shows the median price of a helicopter ride to a hospital is $39,000, and that figure is rising. In New Mexico, air ambulance charges have gone up 300% since 2006.

Helicopter bills go directly to the patients. Helicopter services stay out-of-network- and therefore are allowed to balance bill their costs to individual patients after any insurance coverage applies. The press is replete with shocking examples, such as the $47,000 bill to an Arizona family, $36,000 for a child in Virginia, or the average bill in North Dakota of $63,000.

States (including North Dakota, Wyoming, and Florida) have tried to reign in these super-sized surprised bills to patients, but without effect. The Airline Deregulation Act of 1978 prohibits State governments from controlling pricing for air ambulances.

That leaves the problem to D.C., where Surprise Medical Bills are receiving a lot of attention in Congress. Last year the House of Representatives passed an FAA reauthorization bill that would end that special treatment- the Senate did not. Currently, none of the Surprise Medical Bill proposals circulating in Congress would bring the cost of helicopter ambulances down- or even address the issue.

2. If you would like to know more about socioeconomic factors in rural health, healthcare workforce shortages in the country and other demographic differences between urban and rural America- The National Rural Health Association [NRHA] is an excellent source.