Ever since FDR set the standard, first-term American Presidents are measured on their 100th day in office. As we get closer to that mark for President Joe Biden (on April 30th), it is time to review his promises, priorities, progress, and pitfalls. My focus, of course, will be addressing how this new Administration has done in the arena of health care.

What score would you give Joe? How is the American Public grading him at this mile marker?

* In this publication, I will be referring to “Coronavirus” and “Covid” rather than the more medically correct COVID-19, coronavirus disease, or 2019 novel coronavirus 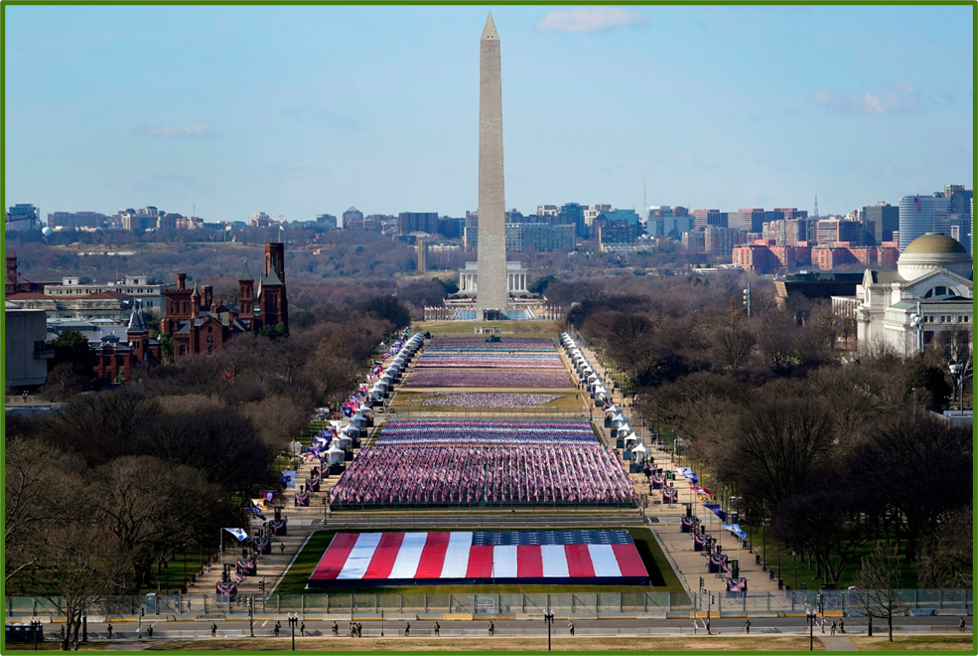 The Beginning: Where We Were on January 20th

Joe Biden stood before a field of 200,000 flags on the National Mall on January 20th, becoming our 46th President in the presence of fluttering representations of the people who could not attend in person due to Covid. [photo credit: NPR.org, Jan 20, 2021]

That day there were 190,138 new cases of Covid in America, an improvement over the peak in new cases (300,699) in the country on January 8th. The downward trend has continued since Inauguration Day; on April 3rd, there were “only” 36,639 new cases nationwide.

How much of that trend should be attributed to President Biden’s short tenure-to-date, and how much is the result of efforts by the previous Administration? That is a fair question, but President Biden has approached the pandemic in many ways that are distinctly different than his predecessor.

As I have written before, there has always been deference to the individual states in the arena of health care, as determined by our Constitution and the Police Powers inherent in State sovereignty. When the Trump Administration gave primary responsibility for vaccine distribution and Covid response to the states and local governments, it was in keeping with a conservative view of the proper role of the Federal government.

That strategy, however, had consequences. States competed with each other (and FEMA) for scarce supplies, public health measures to limit Covid cases were inconsistent across the country (undoubtedly increasing resentment in stricter jurisdictions), and the roles of various state agencies (and who was in charge), as well as the people appointed as spokespersons for the Administration, frequently changed, adding to the confusion.

The Trump Administration deserves credit and the world’s thanks for the unprecedented development of multiple Covid vaccines in record time. Operation Warp Speed was astounding, but the initial roll-out of those vaccines was not.

As early as January 20th, locations from New York City to San Francisco warned they had only days of vaccines in storage, some even less. Worse still, vaccines sent to well-intentioned but under-resourced state and local governments in other locations had vaccines in cold storage, not in arms. On January 18th, the report was “according to data from the Centers for Disease Control and Prevention, of the roughly 31 million doses that have been sent out, about 12 million have been used.” In response to the disarray, both the American Hospital Association [AHA] and American Medical Association [AMA] issued calls for a “coordinated, comprehensive federal response.”

This was the status of the Covid Pandemic as Joe Biden stood before 200,000 memorial flags on January 20th.

Day One: Executive Orders and a Plan

In his first hours as President, Joe Biden left no doubt that he would use the Federal government in the fight against the Coronavirus more aggressively than his predecessor. On Inauguration Day he issued ten Executive Orders related to the pandemic, including:

President Biden also signaled a renewed commitment to fighting Covid internationally by reinstating ties with the World Health Organization [WHO] and committing to the COVAX initiative “Working for global equitable access to COVID-19 vaccines.“

The Biden Administration did not take authority away from the states (in fact could not Constitutionally). Instead, the Biden White House provided more funding to state & local governments to address supply needs, vaccination distribution and to support immunization efforts. FEMA stepped up its presence by operating massive vaccination centers in hard-hit urban areas and launched mobile units in hard-to-reach rural regions.

The next day, January 21st, President Biden released his 200-page “National Strategy for the Covid-19 Response and Pandemic Preparedness” plan.

Dedicated to “Listen to Science” in responding to COVID, this plan fleshes out many of the initiatives announced the day before and added much more (go here for details and here to download a copy).

Publishing a written pandemic plan is not an innovation. Both President George W. Bush and President Barak Obama had written plans (copies available here and here).

President George W. Bush provided “global leadership” in successfully averting the first potential global pandemic (Avian Influenza) in 2005. His Administration’s written plan was instrumental in formulating the Obama Pandemic Plan (published December 2016), which again provided coherent guidance in addressing both the H1N1 (swine flu) outbreak (2009/2010), and the Zika virus (2016). It also helped the Obama Administration assist West African nations in containing an Ebola outbreak (2014 – 2016) in that continent before it had a chance to spread to more than a few Americans here at home.

Highlighting the value of a written emergency plan was a 69-page “playbook” from the National Security Council in the Obama White House in 2016. With clear, color-coded instructions (you can see for yourself here), this playbook provided step-by-step instructions such as:

“Is there sufficient personal protective equipment for healthcare workers who are providing medical care?” the playbook instructs its readers as one early decision that officials should address when facing a potential pandemic. “If YES: What are the triggers to signal exhaustion of supplies? Are additional supplies available? If NO: Should the Strategic National Stockpile release PPE to states?”

President Trump’s team “set aside” the Obama pandemic playbook (and its existence was denied by then Senate Majority Leader Mitch McConnell in May 2020 as the Covid crisis was unfolding).

Concern about Trump’s signature “go it alone” style in the face of a pandemic raised concern as early as 2016; his disregard for any guidance from his predecessors was a common complaint about the Trump White House throughout the emergence of the Covid pandemic.

On January 21st, therefore, the publication of the Biden pandemic plan was not a novelty; it was “a return to normal.” [quote]

Although an Act of Congress (and a controversial one at that!) is not technically an Act of the White House- it certainly would not, and could not, have been passed without the involvement and the pressure of President Biden. He signed the Act into law on March 12th, hours before he delivered his first prime-time address to mark the one-year anniversary of the pandemic, which – as of that date- had claimed 529,000 American lives (as I write this, that number is now 559,741).

The Act is massive, both in size (219 pages) and cost ($1.9 Trillion). Many components of the Act address the economic impact of Covid on individuals, small businesses, and state & local governments; other parts of the Act directly impact health care providers, patients, and access to care, such as:

For more about the American Rescue Plan Act, there is an excellent summary of the Act published by the American Hospital Association [AHA] available here; if you want to read the Act itself, you can get a full copy here.

The velocity of improvement in all indicators in the war against Covid changed dramatically after January 20th. On the 49th day of the Administration (March 10th), vaccine doses delivered reached a record 2.9 million shots in 24-hours- a rate three and a half times higher than were administered on Inauguration Day.

That is only one of many mile-markers in this first 100 days of Biden leadership:

We Have A Long Way to Go

On April 1st – a month shy of the 100-day marker, America approached a population rate of vaccination approaching 20% in many states, with rapid progression across the country. 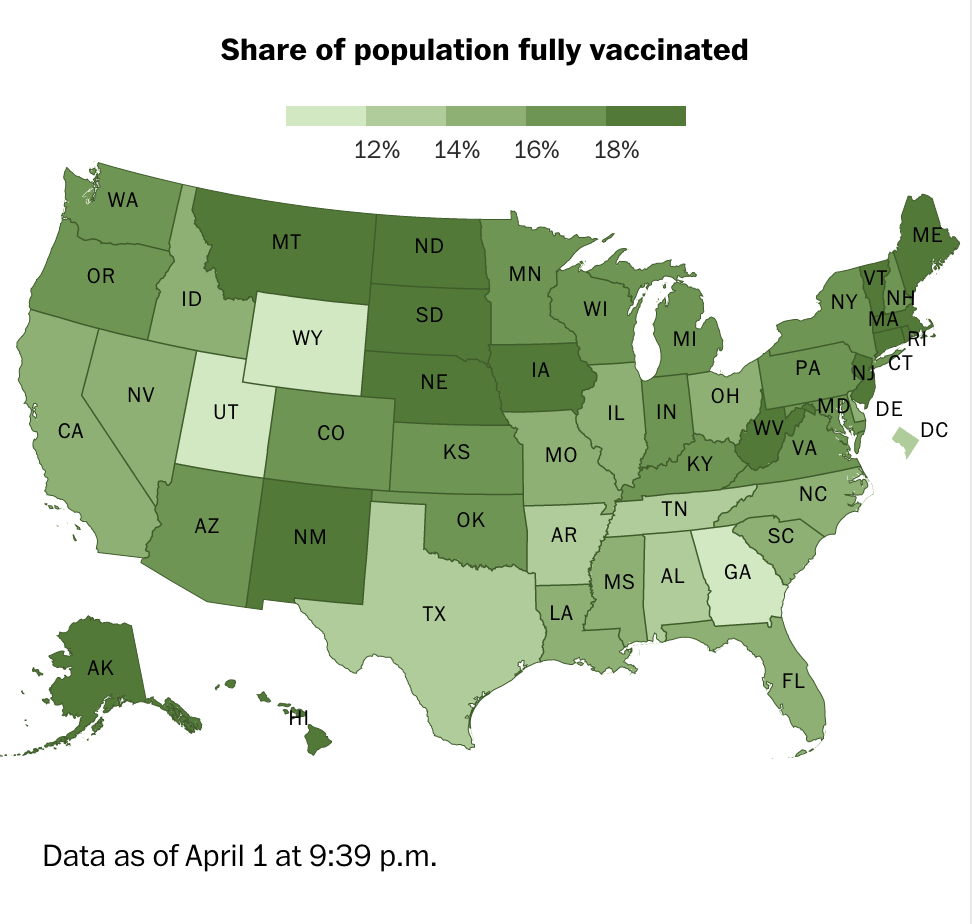 However, we do not know precisely what percentage of our population needs to be immune to Covid before we reach “Herd Immunity,” but estimates are around  70% to 80%.

The hurdle of vaccine hesitancy will make it harder to achieve herd immunity as the most willing Americans get vaccinated. Recent setbacks with the J&J vaccine will slow the rate of vaccinations, at least temporarily. New variants of Covid increasingly threaten the effectiveness of all the vaccines in our current arsenal.

We are not through this pandemic yet.

President Biden acknowledged that at the Rose Garden celebration of the passage of the American Rescue Plan Act on March 12th:

It’s one thing to pass the American Rescue Plan. It is going to be another thing to implement it. It’s going to require fastidious oversight to make sure there’s no waste or fraud and the law does what it’s designed to do.”

He added, with emphasis: “And I mean it, we have to get this right.” [quote]

In other words- we’ve still got a long way to go- but we can celebrate how far we have come.

How Would You Grade Joe?

Grading Joe is ultimately up to you- the voter.

I can tell you, however, that he is getting high marks from the American Public, at least on his handling of the Covid crisis. On March 28th (the latest poll), his approval was a whopping 72% favorable. That’s a number all of his recent predecessors would envy (for comparison with polling for Presidents Trump & Obama, go here).

On that happy note (for President Joe Biden at least!), I will leave you for now.

Next time: Assessing the Biden Administration in the first 100 days on health care issues NOT involving Covid. Until then- be safe. Be well.

At 1984 words I think I’ve kept you long enough! Want TO Know More will return in my next Fontenotes.