Are you an antibiotic steward?

You will want to be…I hope…

I would like to briefly discuss the problem with over- utilization of antibiotics- and what the risk is to you, your family, and your community. Most of all- I want to leave you with an understanding of how you can help.

Antibiotics: Your Choice or Everybody’s Business?

We all know antibiotics are fairly standard treatment­ and all of us want to make medical decisions with our provider in the privacy of the exam room. Whose business is it if you are given an antibiotic you don’t really need?

Let’s say you (or your kid) has the flu­ and you really want an antibiotic. The problem is that the flu (and most colds) is caused by a virus­ which could care less about an antibiotic.

Antibiotics only kill off bacteria­- so your new drug will happily set off to kill many of the good bacteria in your system-­ like the kind that help you digest food and do other things you are fond of.

In the meantime-­ some of the bacteria in your system will fight back­ and grow resistant to the drug. Over time these antibiotic­ resistant bacteria spread through you, your family and your community.

It gets worse. Antibiotics are also given to animals being raised for food. There is some controversy over how much this happens (see below) but many advocates for our agricultural industry acknowledge that antibiotics used solely for growth promotion of animals, rather than to treat infections in those animals, needs regulation.

When these animals are given antibiotics their system also produce stronger, more resistant bacteria­ which we eat. As an added bonus when their manure is used to fertilize fields our fresh vegetables and produce are exposed to the mutant bacteria too.

Over time our world has used antibiotics­ one of the greatest developments of modern medicine­ in a manner that has led, ironically, to bacteria we can’t treat.

Sometimes the bacteria are associated with the most common infections (such
as pneumococcus which causes many child ear infections) but these ninja bacteria can get very, very scary. If you want three good horror stories take a look at MRSA, antibiotic­resistant gonorrhea, and the E. coli bacteria known as O157:H7, which has been associated with many dozens of outbreaks of contaminated food from lettuce to burgers and other foods, and which can cause life threatening symptoms. [And although it is rarely due to resistant organisms or prior inappropriate use, I have to give a shout out to the media favorite Necrotizing fasciitis (flesh­eating bacteria).]

I truly do not think doctors actively over­utilize on purpose­ and I do not think patients demand drugs that will hurt them and their communities.

But this is where this issue gets really interesting.

Because a finger can be pointed to certain regions of our country. As this map from the CDC so brilliantly illustrates­ there are vast differences in how frequently antibiotics are used in different states. This would suggest that the level of utilization is based on regional culture as much as medical need. 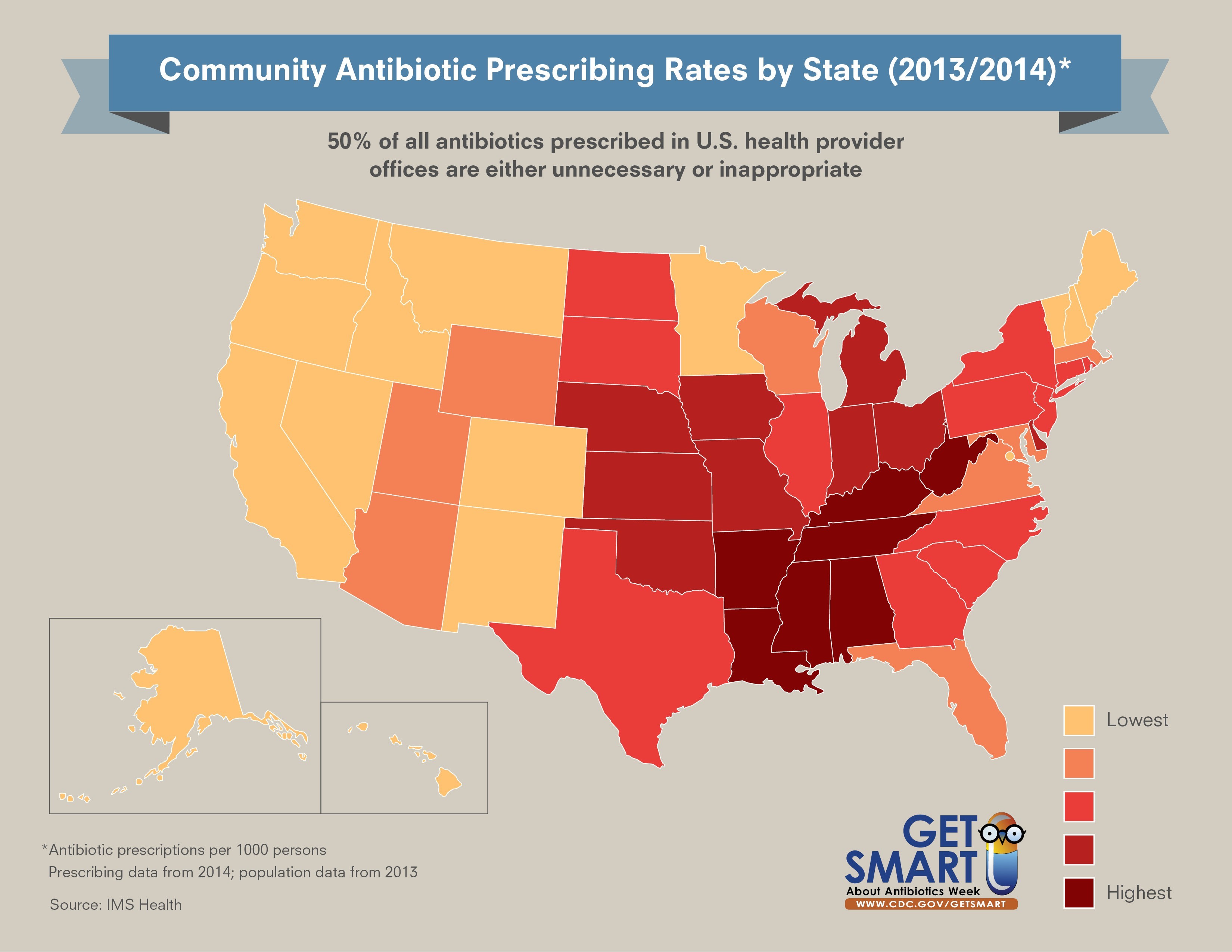 Are people in Indiana sicker than those in Illinois? Do all the extra antibiotics in the Deep South make those populations healthier than Californians?

My point is certainly not that the physicians of Wheeling or Bowling Green are worse than the doctors of Santa Barbara. I am also not saying the doctors in California always get it right -­ but looking at the averages is quite striking.

It appears that “normal utilization” looks different to people in the redder states­- both the providers ordering more antibiotics and the patients requesting them.

What Can We All Do?

No one is suggesting you fail to follow your doctor’s orders, and it would be silly to start thinking of antibiotics as bad things. But there are steps every one of us can take that will help stop the growth of resistant bacteria.

When you get an antibiotic take it exactly as ordered­ as long as ordered (cutting your treatment short­ say only 6 days when your doctor said 10 also fosters mutant bacteria). Don’t hoard antibiotics, and don’t take them without an evaluation to see if you have a bacterial illness that would even respond. For all these reasons­ you also should never share your antibiotics with others.

Perhaps most of all­ stop asking for them. If you need one you will be told that you do.

What is Antibiotic Stewardship?

I want to close with my friend Dr. Charles [“Bud”] F. Brummitt­ who chairs the Antibiotic Stewardship program at Aurora Health Care in Milwaukee­ because he says it best for me:

“Antibiotics are the only class of drugs that if we misuse can jeopardize not only our own health but also those around us. Because bacteria can become resistant to antibiotics quickly with use, it is imperative that we use them judiciously and appropriately to preserve their usefulness and lessen the chance they will be ineffective when we and our loved ones need them.”

If you misuse your blood pressure medication you only hurt yourself­ but with antibiotics we are all collectively hurting everybody.

Antibiotic stewardship is educating the medical community and all of society to protect us from losing major successes in health care, such as immunizations, and antibiotics themselves. It is a lesson we all need to take to heart­ for ourselves, our children, and all that follow beyond.”

I sincerely hope you all hear those words as a call to action­ to all of us, and for all of us.

1. For more about superbugs generally, and what precautions to take to protect yourself and your family:

2. I mentioned there is a controversy over the commonly cited FDA statistic that 80% of antibiotics in this country are given to animals. Here is more about that argument: