The No Surprises Act went into effect on January 1st; surprise medical bills, which “arise when insured consumers inadvertently receive care from out-of-network hospitals, doctors, or other providers they did not choose” [quote], are now prohibited.

This is a significant, long-awaited relief for the public but also a possible defeat for some physicians and other providers.

As my readership includes both patients and health care professionals, I will address both perspectives- the winners and losers– in this hard-fought campaign.

Today’s Fontenotes explains the Surprise Billing problem, what changed January 1st, and why it is exciting news for patients and families everywhere.

In my next edition, I’ll outline the debate between the insurance industry and providers (if patients can’t be billed, who will get left holding the bag?) and the status of that ongoing struggle.

But for now- let’s get to the “Happy Side” of the No Surprises Act!

People access health care in different places according to circumstance; emergency intervention is usually determined by proximity- not the patient’s insurance policy, whereas planned admissions (such as elective surgery) bring the patient to an “in-network” facility. Most patients understand how they can wind up with out-of-network providers in the first case- the “surprise” is how often care isn’t covered by their insurance policy during the “planned” hospitalization.

Twenty percent of people undergoing elective surgery between 2012 and 2017 received a surprise bill (averaging $2,011), even though they went to one of the hospitals or ambulatory surgery centers required by their insurance. Professionals practicing in those locations (most frequently anesthesiologists and surgical assistants) sent separate bills directly to the patient because they hadn’t contracted to be part of the patient’s plan and were not part of the hospital bill.

Surprise bills for “out-of-network” treatment are also common in emergency care. Even though the ambulance or your family brought you to the right place, the physician staffing the ER that night hadn’t contracted with your plan. This occurs in 1 out of 5 emergency room visits, predominantly in for-profit hospitals (at least in New York).

As you can see from this excellent chart from Kaiser, mental health and substance abuse, intervention in heart attacks, and (strangely) mastectomies all have high rates of surprise billing: 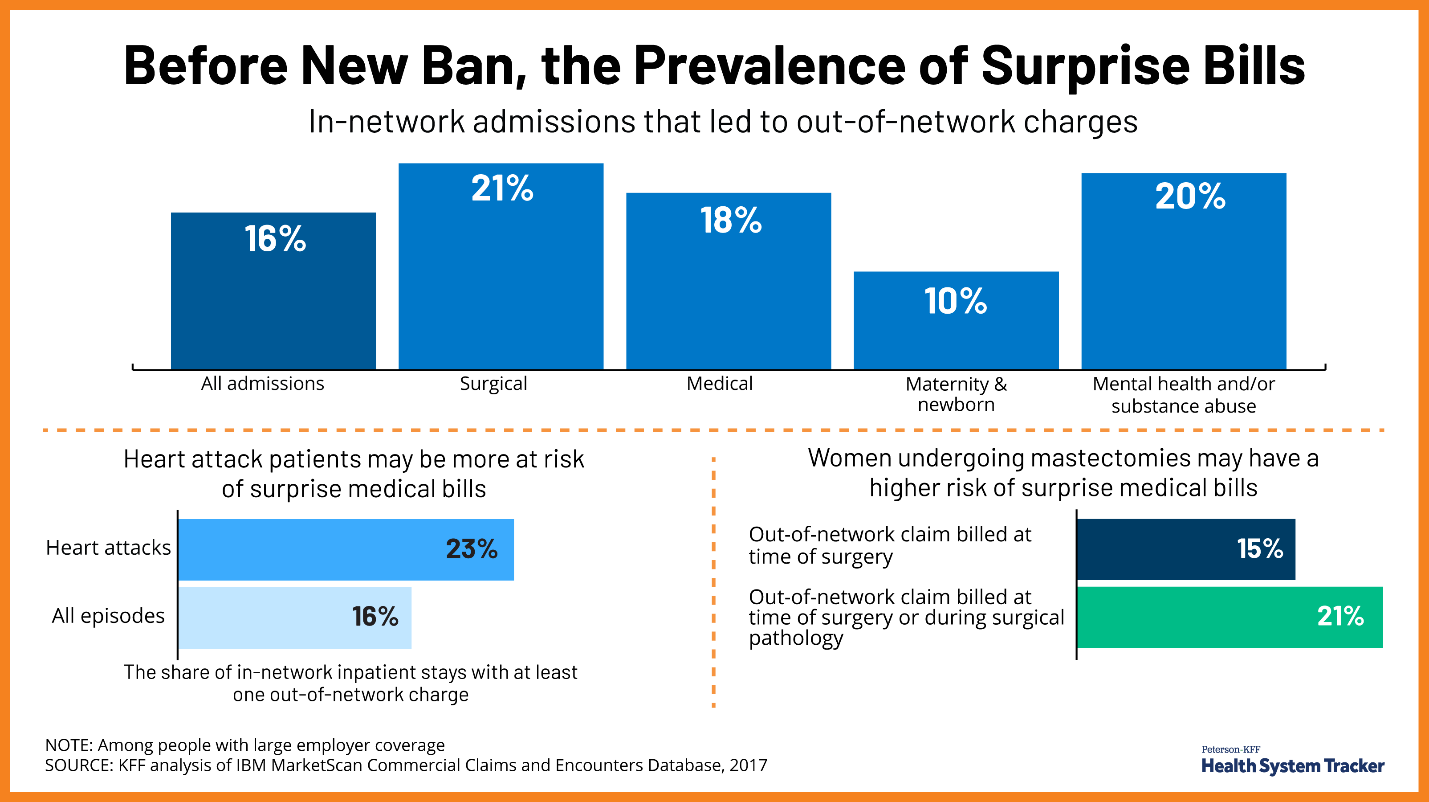 The problem is even worse in Rural America.

Air transport of emergency patients is a necessity in less populated areas– many rural hospitals don’t perform neurosurgery on head trauma cases, have capacity for crisis cardiac surgery, or facilities to care for premature babies or other high-risk infants. Extracorporeal membrane oxygenation (ECMO) is a life-saver for patients with severe Covid, but not available in most (if any?) community hospitals. (Living in a rural town in Texas, I hear helicopters overhead almost daily during this pandemic).

The average estimated cost for air ambulances (both helicopter and fixed-wing emergency air transport) rose 76.4% from 2017 to 2020, with the median potential bill direct to the patient of $21,698.

People ignore Surprise Medical Bills at their peril. Failure to pay can result in additional charges, pursuit by a collection agency, legal action, and garnishment of the patient’s wages (or recoupment from the estate if the patient dies).

“Surprise bills” to patients for medical care contributed to two-thirds of all bankruptcies filed in America between 2013 and 2016.

In a September 2018 poll by the Kaiser Family Foundation, fear of these enormous unexpected bills ranked higher than concerns about prescription drugs, rent, and other expenses: 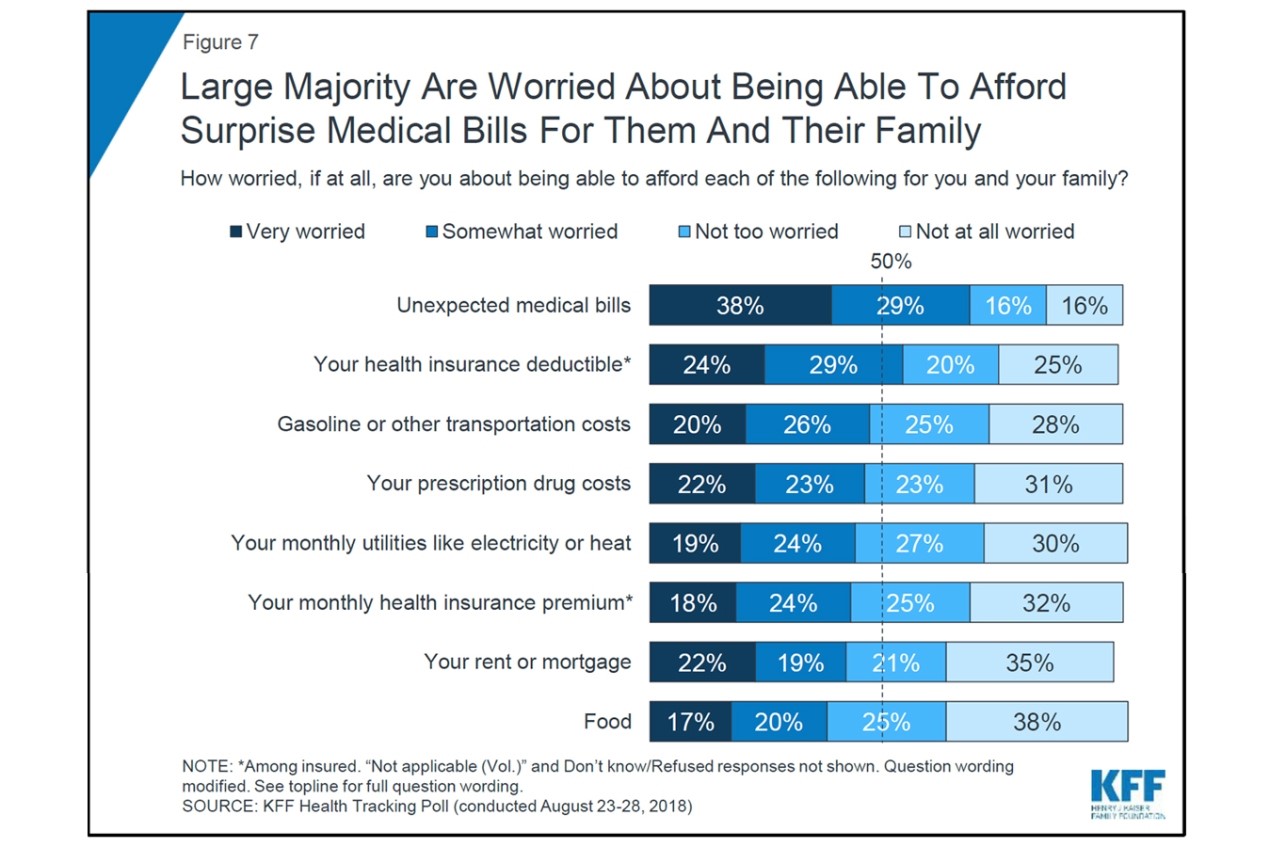 Several states have legislation protecting people, at least to some degree, from surprise medical bills. As of February 2021, 18 states had “comprehensive” protections, 15 had “partial” reforms, and 17 states hadn’t addressed the concern at all. (The Commonwealth Fund has an interactive map where you can learn more about the history of legislation and protections in your state.)
Let’s look at Texas as an example, because it had more surprise medical bills than other states before it passed a law in 2019 (in 2017 Texas was 1 of 2 states with the highest rate (35%) of emergency visits resulting in at least one surprise medical bill- the other was New York). The Texas State law applies to people with “state-regulated” health plans, which is only “about one-third of Texans with private health insurance.” (The same source also says the law only applies to 16% of Texans, so I will admit I am confused about the actual impact of the Texas law.) Either way, the law does not cover 100% of Texans, yet Commonwealth lists Texas as a state with “Comprehensive” protections on their map. I suggest you use this resource as a starting point but spend time finding out more about protections in your state.

Because the new Federal Law covers everyone. * (State laws will remain in effect but must rise to the level of the Federal protections- the No Surprises Act creates a “floor” for all other laws. [Source])
*Please note that billing patients for out-of-network care isn’t allowed by Medicare, Medicaid, TRICARE, the Indian Health Services, or Veterans Health Administration, so the No Surprises Act did not need to reach those populations. [Source]
What Federal Protections Began January 1st?

This section is all paraphrased from a CMS Fact Sheet available here.

I. If you have private insurance, the new law:

II. What if you want to get care outside of your policy? Imagine there is a surgery you want to be performed by a surgeon, not in your network? Or what happens if you would rather pay for your care directly and not use your insurance (i.e., “Self-Pay”)?

III. What if you are uninsured?

IV. What about Air and Land ambulances?

V. What if you think you have been over-charged?

That concludes this brief review; if you would like more information about your new protections from “Surprise Bills,” I suggest this 2:40 film from Kaiser or KFF’s excellent article: No Surprises Act Implementation: What to Expect in 2022, available here.

The No Surprises Act: the Other Perspective

Passing a law to prohibit “Surprise Medical Bills” was never controversial as an idea; no one in Washington was arguing to continue burdening patients and families with these hefty bills. Support was solidly bipartisan in Congress and implementation seamless between the Trump and Biden Administrations.

Even so, it took years to get the law through Congress, and it was only passed as part of a year-end legislative package in December 2020, not as a stand-alone Act (a proposed “No surprises Act” failed in the House of Representatives in 2019).

This is because, despite widespread consensus on protecting the public, ferocious lobbying on Capitol Hill predated the law for two years. The battle (between the insurance industry and providers) asked this question: if patients can no longer be balanced billed, who will be left holding that empty bag?

The answer to that question is why I started this Fontenotes suggesting this law could be catastrophic for some providers.

I will return to that debate in my next Fontenotes.

For now, enjoy your new freedom from worrying about Surprise Medical Bills!

Publicized cases of extreme air ambulance bills such as the $36,000 charge for a 34-mile trip from a hillside where a child fell to a pediatric hospital in Roanoke, Virginia, in April 2018, or the $52,112 for a 20-mile transfer of a Coronavirus patient from one hospital to another in Philadelphia in 2020, outraged the public, and rightfully so.

However, in recent years states attempting to regulate the air ambulance industry ran into an insurmountable problem (for a state legislature, that is). Air ambulances (both fixed-wing and helicopters) are covered under The Airline Deregulation Act of 1978, which was intended to encourage more competition. That old, arcane law forbids states to regulate prices for any air carrier, which applies to air ambulances. [Source]

Some states tried to circumvent the Federal barrier, such as a 2019 attempt by Wyoming to turn air ambulances into a public utility so the state would have the ability to regulate them. The vehicle to achieve that status change was a Medicaid waiver to CMS; the waiver was denied in January 2020.

When Congress has looked at the issue, such as through a Department of Transportation’s Air Ambulance and Patient Billing Advisory Committee in 2019 (required as an alternative when a bill to alter industry control died in the House of Representatives), the industry successfully pleaded that their charges to patients and families (i.e., “balance billing”) are “critical to their business model.”

The impasse between the public, state legislators, and the federal protections has infuriated many of us (my husband and I paid for a similar air ambulance bill in 2017).

Literally, nothing could stop this industry except an Act of Congress.

Well, with the No Surprises Act, Congress just stopped them in their tracks. Thank You.