I will admit I am a big fan of HGTV house renovation shows– it is what I watch when I am at the gym on a treadmill. There have been many times I have (literally) gone an extra mile to see the door open on a stunningly transformed home.

But I am not sitting by my T.V. today waiting for the door to open on the secretive Senate version of the Obamacare repeal act. It’s not going to be half as exciting.

We won’t know until Mitch McConnel’s Big Reveal all the details of the Senate bill (are we killing Medicaid expansion in 3 years or 7? Are people with pre-existing conditions going to be covered in risk pools, and if so, will they have to pay their own way? Will the wealthy get all their taxes back or just the majority?)

The result, however, is very clear. This bill will be the Senate’s attempt to repeal (and not replace*) the Affordable Care Act [ACA or “Obamacare”].

Is that what Americans want?

Americans and Obamacare – a Rocky Start

The Affordable Care Act did not come to fruition in March 2010 with a swell of public gratefulness and excitement. A CNN Poll released the day before President Obama signed the ACA reported 59% of Americans opposed the law.

As Bill O’Reilly reminded President Obama in an interview in February 2011, polling at that time showed 50% of respondents opposed to the law– only 41% of Americans viewed the law favorably. Another CNN poll in September 2013 found a minor uptick to 43% favorability, but the slide continued downward with Obamacare hitting its lowest score at 37% approval in November 2014.

The GOP Starts Winning on a Promise to Repeal and Replace

The nadir of the ACA’s popularity coincided with the 2014 election.  Under the banner of “Repeal & Replace Obamacare!” the GOP won 9 seats in the Senate and 13 in the House of Representatives.

True to their word, as they gained control, the GOP started voting to repeal Obamacare. A lot. Like more than 50 times.

None of those votes counted, of course, when President Obama was in office to veto any true threat to his signature law.

Which of course changed with the election of 2016.

A funny thing happened just as the GOP was finally able to fulfill its greatest wish. The public started moving in the opposite direction.

In part this happened because the most popular portions of the law had finally taken hold with the American public: the prohibition on excluding people with pre-existing conditions, the end of life-time caps on benefits, and the expansion of Medicaid (now implemented in 31 states and the District of Columbia) all began January 1, 2014.

Another component in the apparent shift in opinion points to a misunderstanding about the negative reports in the earlier years of the law. There has always been a portion of detractors that were disappointed that the law didn’t go farther (such as establishing a single-payer system). For example, 16% of people reporting dissatisfaction with the ACA in a September 2013 CNN poll were upset because “it wasn’t liberal enough.”

And perhaps, just perhaps, Americans got cold feet when repealing the law they love to hate became an actual possibility after election day 2016.

For whatever reasons, the tide against Obamacare has shifted. In February the Pew Research Center released a report titled “Support For 2010 Health Care Law Reaches New High”. The graph embedded in that report tells the story: 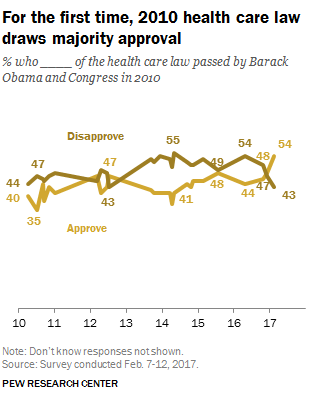 And Now for the Big Reveal

This is the backdrop to the feverish attempts to draft a bill that can pass the Senate. Originally assigned to 13 men behind a locked door, the final details of the Senate’s purported masterpiece are being written by “a handful of staffers who are members of the Republican leadership in the Senate.”

This latest, bizarrely secretive attempt to write a law that can ultimately pass the Senate (to say nothing of the House) only points to how difficult it is to destroy a law the public has grown fond of.

We all know the punchline of this Political theater- when the votes are counted The Affordable Care Act will be one step closer to being repealed, ** and the GOP will continue on a promise made to a public that no longer exists.

* Why do I say the Senate’s attempt to repeal (and not replace*) the ACA? Both the House Bill (The American Health Care Act) and the yet-to-be-revealed Senate Bill are constrained by the rules on Reconciliation– the arcane rule created in 1980 that allows the GOP to pass a law to repeal Obamacare without any Democratic votes and (more importantly) no filibuster.

Reconciliation can only be used for legislation that changes spending, revenues, and the federal debt limit. Any law that will replace the majority of components of the Affordable Care Act will, therefore, require passing a law the usual way- i.e. with 60 votes (including Democratic ones). An excellent short film explaining Reconciliation from Kaiser is available here.

** Why does the Senate bill (if passed) only get “one step closer” to repealing Obamacare? Whenever the House and Senate pass bills that differ- there must be an agreement reached on the details of the law before it is passed again by both Houses- and only then can it be sent to the President for his signature. For more on that process watch this time-honored film from Schoolhouse Rock- I’m Just a Bill