Well-insured people have received bills far beyond their expectations for “out-of-network” care for decades, but the problem has recently become more significant: in reality, in the press, and the minds of politicians on both a state and federal level.

What are Surprise Medical Bills, and how do they happen? Can legislation stop them- and should laws be passed on a state or federal level? What are Senators Alexander and Murray proposing- and will their effort succeed?

How Do Surprise Medical Bills Happen?

Surprise Medical Bills occur because of the convoluted way we reimburse medical care in our country. Private insurance companies contract with hospitals, physicians, nurses, and other providers to deliver care to their policyholders for specific contracted rates. These rates (“in-network”) are negotiated to benefit the insurance company (lower costs) as well as the providers (increased volume).

Not every provider in a community will be on that contract. Maybe they weren’t asked because they did not meet other requirements of the insurance company (such as quality metrics). More likely they did not sign because they did not want to reduce their fees- or didn’t have to (such as when a large number of specialty physicians join together to create a monopoly).

Providers who do not sign on to a contract are “out-of-network” and can charge anything they want (there are some limitations beyond the scope of this Fontenotes). For example, anesthesiologists and emergency room physicians are often “out-of-network,” charging about 5 times more than the equivalent Medicare reimbursement. Radiologists, pathologists, surgical assistants, and ambulance companies are also likely to be out-of-network providers.

To add to the financial risk of “out-of-network” care, the extra bills you pay may not be part of the maximum out-of-pocket costs promised to you in your insurance policy (as required by the Affordable Care Act or “Obamacare”).

This illustration from the American Hospital Association [AHA] helps to explain the complexity of the situation: 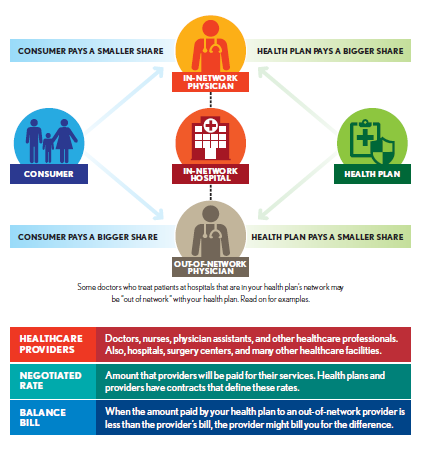 It used to be easy to know where your “in-network” providers were– you would seek care at the hospitals and offices listed on your insurance plan.

Today it isn’t that easy to avoid “out-of-network” bills. This is particularly true in Emergencies (1 in 5 ER patients will get a Surprise Bill). Given that the nature of a real emergency means you will go to the closest ER,  you could easily wind up at an “out-of-network” facility (such as a freestanding Emergency clinic). But even if you do go to your network hospital- the physicians that greet you may not be in-network! Not only is this possible- it is likely- particularly in rural America.

As hospitals have grown and developed, they increasingly have affiliations with separate entities to provide physician services- a model now common for Emergency Room physicians, anesthesiologist, hospitalists, and other specialty services. As this has happened, it has become more likely that even non-emergent care- like having a baby or an elective hip operation- can result in “Surprise Medical Bills” from those physicians (or the group that employs the doctors and contracts with the hospital to place them on-site).

One study in New York found that 90% of Surprise Medical Bills are now stemming from in-hospital, not emergency, care.

But how would you identify physicians costly to you if you did not know to ask? According to Kaiser Foundation, 7 in 10 people who receive a Surprise Medical Bill at the time had no idea the physician treating them was out-of-network.

How Would a Law Interfere with Contractual Promises Between Private Parties?

There are reasons why fixing this problem is not easy. Insurance Companies advocate limiting the fees that can be charged by out-of-network physicians for obvious reasons, but should legislators be involved in setting prices between private parties?

On the other hand, hospital and physician groups argue that to infringe on their pricing violates the principles of an open market (a problem already in health care ), and contend that the fault lies with the insurance companies, who fail to create an adequate network in a community of in-network providers.

Hospitals and Insurance Companies may agree that patients should not be subject to Balance Billing- but that leaves the physicians and other providers unclear how to get reimbursed for their services; that solution leaves providers “essentially without protection.”

Physicians, hospitals and insurance companies all say out-of-network care should not be the responsibility of patients, but Battle lines are already drawn between all 3 sectors of the health care industry to determine how to fix the problem without any of them bearing the cost.

Predictably, insurance companies, hospitals, and physicians all blame each other for the burden on patients and the American public. (A third of the $5 billion raised by GoFundMe since its inception in 2010 has been raised to help cover medical expenses.)

Isn’t This an Issue for the Individual States?

The regulation of insurance, as well as business dealings, falls squarely within each state’s legislative authority.

Twenty-Five states already have laws to prohibit balance billing, set rates at an amount commiserate with local billing practices, require arbitration when issues arise, or otherwise address the problem. 20 more states are currently considering such legislation, as seen on this Chart: 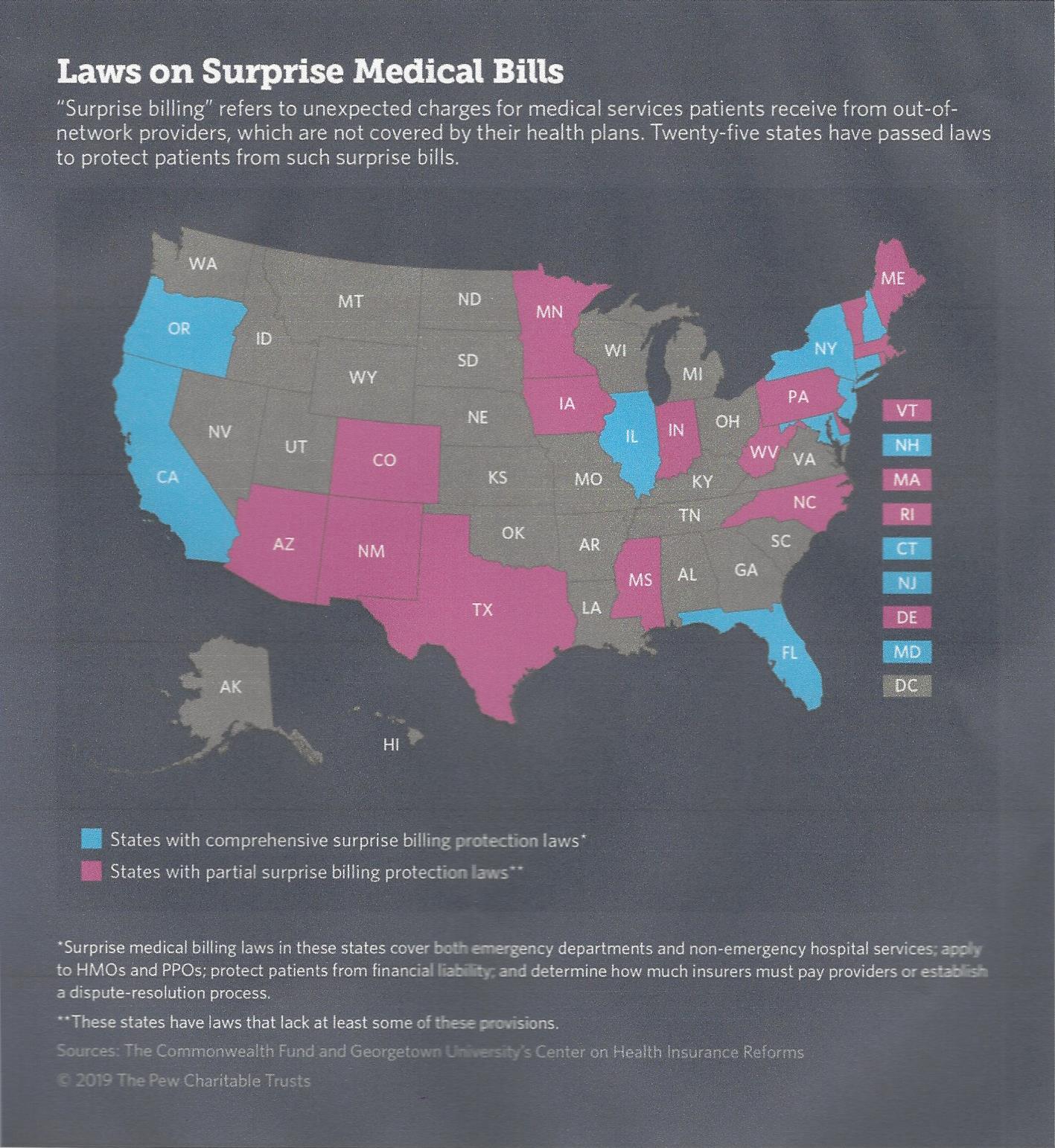 But there is a big problem- and its name is ERISA.

Because of this 1974 Federal Law- 61% of people who have private insurance- specifically those who are insured by a self-insuring employer-sponsored health plan- cannot be regulated by State Legislation.

What that means is Surprise Medical Bills will be a problem for a large sector of Americans until Washington passes a federal law.

What Do Senators Alexander and Murray Propose?

With this background, the urgency of Federal legislation is evident, as is the reason why this is a health care issue that can achieve bipartisan consensus- a rarity in Congress! (The Bill released by Alexander/Murray was one of many bipartisan proposals.)

The draft legislation incorporates nearly 3 dozen proposals all directed at lowering health care costs– Surprise Medical Bills is only one (watch for discussions on the remainder in future Fontenotes).

To become law, the Alexander/Murray proposed legislation must pass both the Senate and the House of Representatives.

The Senate vote is anticipated in July; the House released its own bipartisan proposal for legislation on May 14th.

Assuming both are successfully passed (and that is far from certain)- and the two can reconcile any differences before a final vote- for the first time, we will have a federal law to stop Surprise Medical Bills.

It is hard to believe he would not. President Trump raised the issue during a White House press briefing on May 9th when he said:  “We’re determined to end surprise medical billing for American patients.” A top White House official warned hospitals in March that they need to address Surprise Medical Bills “if they don’t want Congress to do it for them.” HHS Secretary Azar has also weighed in on the need to fix the problem.

This is an issue that appears to have the support of the Trump Administration. In fact, a Presidential Executive Order on various health care matters anticipated as early as next week may try to usurp the issue from Congress (although specific details on how to solve Surprise Medical Bills without burdening patients, doctors, hospitals or insurance companies are not expected in the Order).

The question is, can all of these parties agree on how to end Surprise Medical Bills? (There are many options currently being discussed.)

To add to the suspense: consensus will have to happen during the intensity of the 2020 election season.

I hope you will join me in crossing your fingers as we wait to see if Washington can get this done!

*Senators Alexander & Murray were the duo that tried throughout 2017 to create a bipartisan resolution of the conflict surrounding insurance company subsidies through the ACA.