This past Sunday I watched a prominent U.S. Senator– one who is very vocal about health care- confuse the terms “Medicare” and “Medicaid” three times in a 5-minute interview.

If he gets them confused, I thought a quick review might be helpful for non-Senators as well.

Memory tip for Senators: “We care for our elderly”

Medicare was passed in 1965 and signed by President Lyndon Johnson. The ceremony for the signing happened in Independence, Missouri where President Johnson sat at the table with President Harry Truman, who unsuccessfully fought for insurance for all Americans 20 years earlier. (Truman was not the first President to fight for universal coverage- the idea of a national insurance system can be traced back to Teddy Roosevelt who was President from 1901 – 1909.) 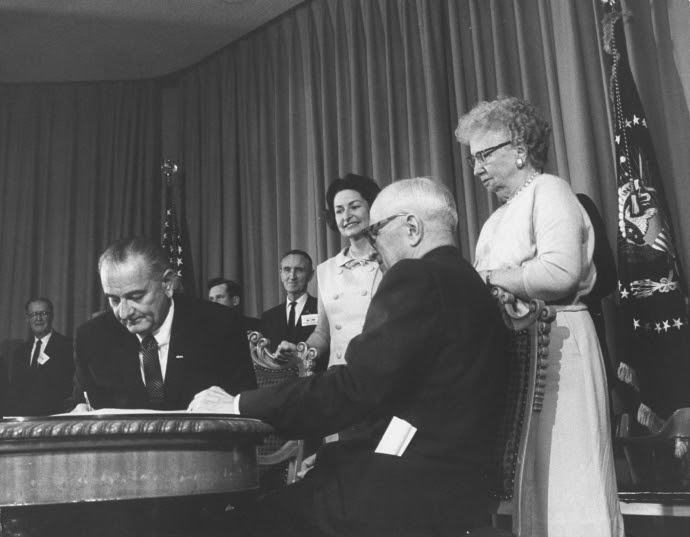 Medicare was more limited than earlier proposals because it only covered Americans 65 years old and older but for that population it had (and continues to have) a dramatic impact. (If that strikes you as a controversial statement, go here.)

Medicare is a Federal program administered by the Centers for Medicare and Medicaid Services [CMS], a part of the Health and Human Services [HHS] Department.

However, the types of coverage an individual may have might vary.

There are four different parts of Medicare:

Part A: This is the basic Medicare package. Everyone gets Medicare A (unless you fall under Medicare C). Medicare A is particularly meant to cover hospital bills, but can also include nursing home care (that includes a nursing/care component), Hospice, and possibly Home Health care. (For more about what Part A covers go here.)

Part B: Medicare Part B was part of the original law passed in 1965. This part of Medicare is optional- to have it you need to pay a monthly premium. Part B covers out-patient care like seeing your doctor at their office, but it also covers the hospital out-patient department, preventive care, drugs that are given to you at your doctor’s office (as opposed to those you take yourself), physical therapy and other outpatient services. (For more about Part B go here.)

[Supplemental Insurance] Although not part of the Medicare plan per se, most Americans with the financial ability to do so purchase Medicare Supplemental insurance from a private company because Medicare Part A and Part B do not cover all expenses a Medicare beneficiary will need.

Part C: This is also known as “Medicare Advantage” or Medicare + Choice.” Part C was created in 1997 under President Bill Clinton to bring private insurance companies into Medicare- both to provide coverage beyond what beneficiaries were getting through Parts A & B (a Part C plan cannot offer less than the regular Medicare package) and to (arguably) lower the cost to the Medicare recipient. This attempt to privatize Medicare remains controversial, because it is paid for out of the federal treasury (it is not paid for by the Medicare Payroll Tax ), costs more per beneficiary than regular Medicare, and has been abused by some private payers in the program. (For more on Part C go here, for more on the finances of Part C go here.)

Part D: This is the Prescription Drug Benefit passed under President George W. Bush in 2003. The coverage is purchased from private insurance companies to increase the number of Medicare beneficiaries who have insurance to help with drug costs (before Medicare Part D only about 25% of the elderly had coverage for drugs). The actual cost of Medicare Part D to taxpayers remains controversial, as does the decision to include in the underlying legislation a provision that does not allow Medicare to negotiate lower prices from pharmaceutical companies.

Medicaid
Memory tip for Senators: “We offer aid to our poor”

Medicaid passed in 1965 as part of the same law President Johnson signed to create Medicare, but Medicaid is very different than Medicare.

At its core, Medicaid is the program established to offer health care coverage for low-income children, adults, seniors, and those with disabilities. It covers 1 in 5 people in this country, with the majority of funds going to the elderly and disabled, as shown in this graph from the Kaiser Family Foundation: 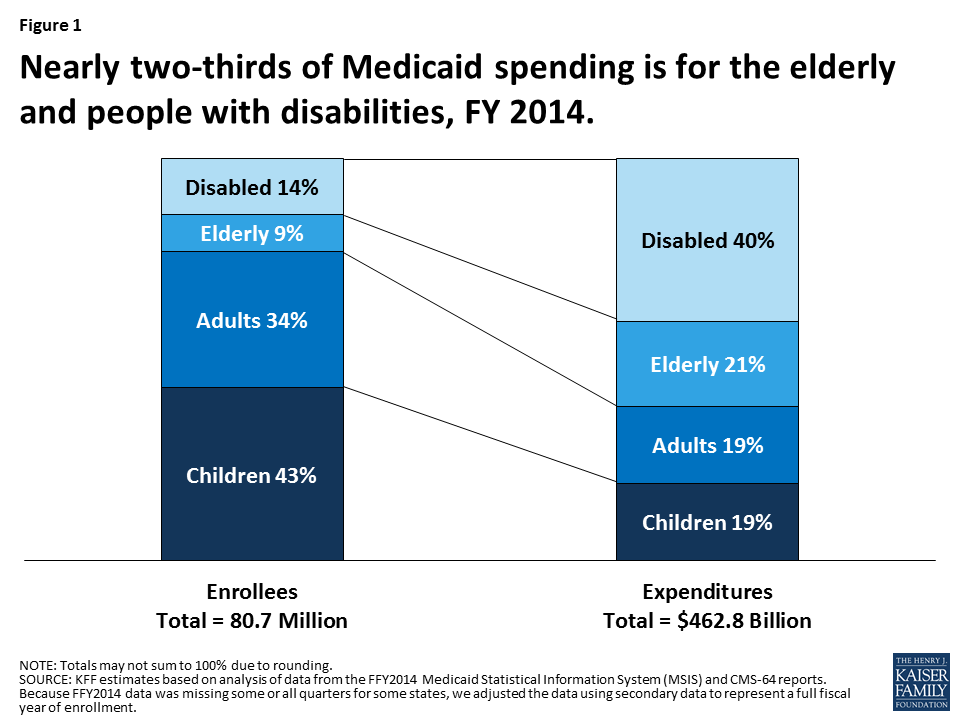 The biggest difference with Medicaid is it is a federal program run by each state. Federal money is given to the states based on actual needs and costs, matching dollar-for-dollar money spent by a state on their Medicaid population.

Because Medicaid is administered by each state, the level of coverage provided, the medical services covered, and the definition of who is eligible all vary significantly (within limits imposed on the federal level).

The ability of a state to control the specifics of their plan explain why “in 2011, Medicaid spending per full-benefit enrollee ranged from $4,010 in Nevada to $11,091 in Massachusetts”. [cite]

The original plan under the Affordable Care Act [ACA or Obamacare] was to expand Medicaid to cover all people below 138% of the federal poverty level (that’s a family of four living on an annual income of $31,000 or less), which also would expand coverage to non-disabled adults.

Including all adults on Medicaid would be an enormous difference in several states, such as Texas , where childless adults without disabilities do not qualify for Medicaid between the ages of 18 and 65.)

The ACA plan for expanding Medicaid everywhere was defeated in 2012 by the United States Supreme Court in the pivotal NFIB decision, which said every state had the right to choose whether to expand its Medicaid program under the law.

Initially, 24 states said “No” to Obamacare; the number since that time has dwindled to 19. (For more on the reasons these states did not participate in expansion, and why 32 (including D.C.) went forward with the plan, see Fontenotes # 14.)

That is Medicaid in a nutshell.

This summer most of the debate in Congress over the fate of Obamacare really was over the fate of Medicaid. There are many people who want to change it, especially to curtail spending and increase the state’s ability to dictate the terms of their Medicaid program.

It would be easy to assume that it is Medicaid that is draining our federal coffers – so I will leave you with one more graph (and please note it is the Social Security we all get that is the biggest social program in the pie): 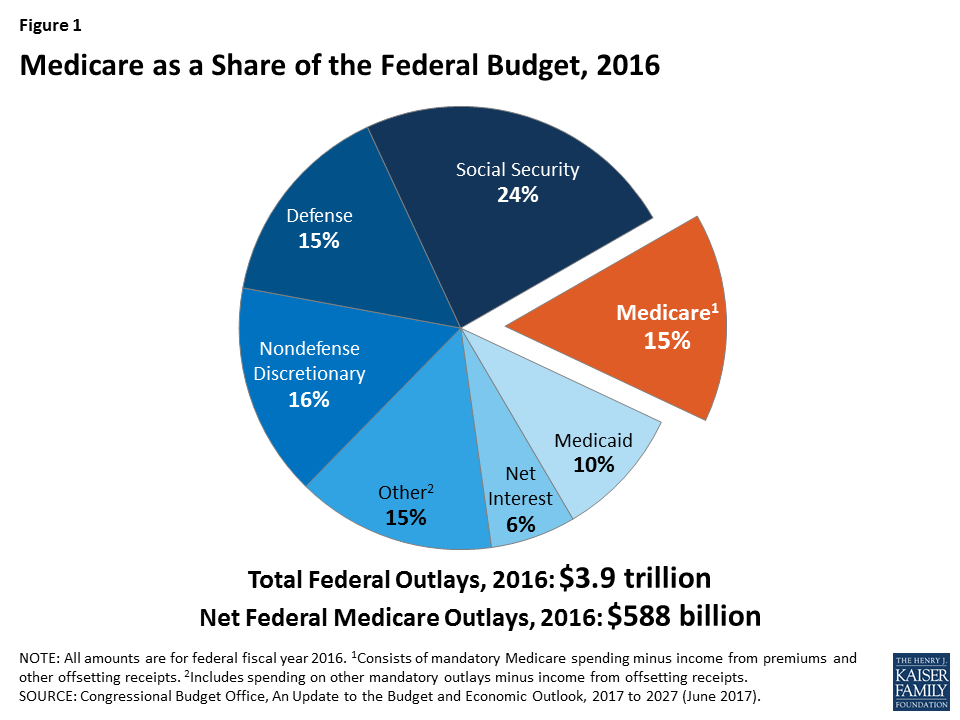 That ends a quick tutorial on two enormously complex programs.

I hope you are now ready to speak on a Sunday Morning news program without embarrassing yourself!

Here is a fun timeline from Kaiser Family Foundation where you can peruse what was happening in American healthcare in 5-year increments, all the way back to the early 1900s.

You might also be interested in this article which addresses whether medicine before Medicare was “the Golden Years” in American health care.