Having lunch with a friend recently we ran into a thorny issue- Medicare. Her declaration to me was:

“Medicare is my money. I paid it in all those years and it is owed to me”

I had heard that said before, but never from anyone directly.

And although I have always thought that statement isn’t true, I found I could not cite any facts, figures or authority to counter her assertion.

So I decided to do a bit of research. Here is what I found.

Are Medicare Dollars Your Earned Money?

The [apparently] common belief that Medicare dollars equate with what you paid in became part of the fight over Medicare reform that was a “hot” issue in the Fall of 2012 and into 2013.

To further complicate the debate, both sides of the argument over the future of Medicare said things that fostered the impression that the money belonged to beneficiaries, such as when President Obama said “I want to emphasize, Medicare and Social Security are not handouts. You’ve paid into these programs your whole lives. You’ve earned them” in September 2012. The sentiment was repeated by [then] House Budget Committee Chairman Paul Ryan on the Laura Ingraham Radio show in January:

“No one is suggesting that what we call our earned entitlements – entitlements you pay for, like payroll taxes for Medicare and Social Security – are putting you in a ‘taker’ category,” said Ryan. “No one would suggest that whatsoever.”

AARP picked up the mantra of “earned” benefits in their fight to keep the government’s “hands off Medicare” such as in this video.

But is it true? Do we all just “pre-pay” our own Medicare costs?

Medicare: Does the Math Work?

Resources are uniform in agreeing that the money put into Medicare does not cover the average beneficiary’s expenses. An example in CNN Money has a couple turning 65 in 2010 with only $122,000 paid in their lifetime in Medicare taxes, with the expectation that they will get $427,000 in health care in return, concluding “when it comes to Medicare … virtually all Americans are getting far more than they pay in taxes.”

Similarly, an analysis in the Christian Science Monitor imagines a “single male of average earnings” retiring in 2010 with a projection “to get back three times as much in Medicare benefits”.

Or, as stated in Forbes:

The amount that American workers have paid and are paying into Medicare isn’t enough to fund all the benefits that are being paid out to seniors under Medicare… Senator Tom Coburn (a physician in private life) has estimated that the average American couple contributes approximately $110,000 to Medicare over their working careers and receives over $330,000 of Medicare benefits.

In fact, in this (admittedly cursory) search I was not able to find a single resource that made the argument that the average American would only cost what they paid into Medicare (assuming, of course, a normal life expectancy).

Social Security May Be Different

The “this is my money” argument has much more credibility when the topic switches to Social Security.

This is evident right from the title of the article in CNN Money: Social Security: Many pay more in taxes than they’ll get back. Or as stated in the Christian Science Monitor:

In recent years the raising of the Social Security retirement age, plus other tweaks, have made the big retirement income entitlement less generous. New retirees won’t get back quite as much income support as they’ve contributed in Social Security taxes.

But the deficit on the Social Security side still does not refund all the extra money poured in for the average Medicare beneficiary.

I found this chart to be particularly interesting (six more scenarios plus important caveats and information can be found in the Politico article] : 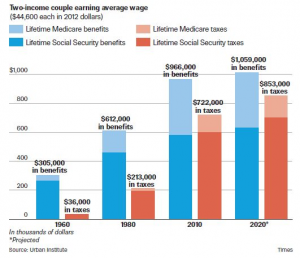 All of these resources, all of the examples I can find in my mini-research, refer to an average person (or couple). What if they aren’t average? Meet my Dad!

Jeff Freymann was born in Omaha on April 9, 1922. He followed his dreams and graduated from medical school just as WW II (European theater) was ending. My Dad served time owed through the Public Health service and eventually would up pursuing the Field of Hematology-oncology. With Residency and Fellowship, he pulled is first real paycheck ($300 a month!) in January 1951.

My Dad had a brilliant career and retired in 1987. I am grateful to report that both he (95) and my Mom (91) are independent and in great shape, largely because of the excellent care they have received through Medicare.

But did they “pre-pay” for all their medical care?

My Dad may be unusual because his working years were decreased by his service and extensive training, but even so- anyone who is 95, or even 80, has a problem if they believe they are only claiming back what they paid in (which my father certainly does not!)

Here is the reason.

It wasn’t even possible to pay into Medicare until 1966. My Dad was 44, which means at best he paid into Medicare for 21 years, and he has been drawing out for 29 (and I certainly hope/expect will continue to do so for many more years).

If you do the math- only a person in their young 70’s (or younger) could have “paid in their whole working life”. And THAT math doesn’t work!

That’s all for now- I have to call my friend and schedule another lunch.

If you want to know more about Social Security, there is a quick and easy Frequently Asked Questions [FAQs] page here

If it is Medicare you want to know more about, Medicare Interactive.org has an extensive resource here.

And of course, the government has lots of information about “Getting Started with Medicare” here.