With the intensity of the 2020 election building and this week’s opening of the impeachment trial, it would be easy to forget all the other activities in Washington D.C. that could dramatically affect health care in America.

To start a new year of Fontenotes, I will provide a quick preview of what to watch for in 2020 from the Federal Courts, Congress, and the Administrative Branch.

In this first installment, I will briefly describe some of the crucial health care issues working their way through the Federal Courts.

Here are three of the legal disputes currently in the Federal Courts that bear watching in 2020:

I. The ACA Challenge

This case is the most critical and has already been the subject of 3 Fontenotes. In a nutshell- this suit could lead to the complete revocation of the Affordable Care Act (ACA or Obamacare), a partial evisceration of the law, or the United States Supreme Court (for the 4th time) allowing the ACA to continue (although the Supremes did revise the Contraception Mandate in 2016- more on that below).

When Fontenotes last discussed the case on July 18th, the 5th Circuit Appellate Court in New Orleans had just heard oral arguments. Its opinion, anticipated throughout the Fall, was finally released on December 18th.

By a 2 to 1 vote, the 5th Circuit agreed with the lower court that the Individual Mandate in the ACA was unconstitutional now that there is no financial penalty for uninsured Americans.

At the same time, the Appellate Court declined to rule the entire law invalid– and sent it back to the originating federal court in Ft. Worth to determine what portions of Obamacare (if any) could be salvaged without a functioning mandate (that judge previously declared the entire law unconstitutional).

This case will inevitably make its way to the US Supreme Court- but the toss of the appeal back to Fort Worth slowed that progression- which has significant political implications because the earliest the Supreme Court could make a final determination on the death or salvation of the ACA would be early summer 2021.

That was where this case rested until January 3rd when the “Blue States” and the House of Representatives- the parties fighting to protect the ACA- asked the Supreme Court to take the case now “for the sake of saving lives and ending uncertainty in our healthcare system.” [quote] The insurance industry trade association [AHIP] filed a brief in support of an immediate review.

On January 10th, the Trump Administration answered with their brief (joined by the “Red States” fighting for the end of Obamacare), urging the denial of the request for an expedited review- to let the case go down to Ft. Worth and not up to the Supreme Court.

As I write, that is where we sit- waiting to see if the Supreme Court will take this case in their current term.

The implications of that decision are enormous. If they accept the challenge, Obamacare could live again or die with finality in June of this year- just in time to create chaos (politically if not literally) right before the Presidential election.

As I was preparing this Fontenotes for publication, the Supremes Stole my Thunder!

Tuesday morning, the Court announced they are not taking the expedited appeal.

What this means is the future of Obamacare will remain uncertain until the case works its way back up through the federal system. It will still wind up in the Supreme Court (although the Court would have to accept the case), presumably this Fall, but perhaps as late as Fall 2021. This means the final blow destroying the ACA (or saving it) will not land until June 2021 or June 2022.

It takes 5 Supreme Court Justices to expedite a review at the Court. We don’t know (and won’t know) how the votes were cast. The idealist and lawyer in me applauded Chief Justice Roberts when he said the Court doesn’t  “go about our work in a political manner,” but the realist in me suspects the votes against a quick decision were from the conservative end of the Court (given refusal was President Trump’s goal).

If that is accurate- it points to a scenario that was unimaginable in 2014 when “Repeal and Replace” was the GOP rallying cry and the Democrats’ significant losses were blamed on the unpopularity of Obamacare.

We now have Democrats urging the Court to make a final determination on the ACA right before the 2020 election, and the conservative states that brought the challenge (and again, maybe the conservative justices as well) delaying a decision- prolonging Obamacare for another year or two.

I believe that points to the growing popularity of the ACA, and the perceived danger of getting rid of the law– now that the GOP has a vehicle to accomplish their stated goal of the last 10 years.

Last May, HHS revealed the Trump Administration’s Final Rule on enhanced protections for health care workers who do not want to participate in abortions or other activities that violate their conscience or religious views. (I say “enhanced” because many Conscience Laws have been in existence since as early as the 1970s.)

The Rule, drafted by the newly formed Conscience and Religious Freedom Division at HHS would provide “a broader array of tools to enforce” those laws, including allowing the government to “punish health care institutions or states and cities with the loss of federal funds if they did not allow workers to object to abortion and other medical procedures on religious or moral grounds.” [quote]

[A quick side note: The need for increased protection is a matter of controversy– the Trump Administration initially said they received 358 complaints in their first two years from providers who claimed violation of their beliefs (the Obama Administration recorded an average of 1.25 every year). On further review, only 20 of the 358 grievances were “related to conscience protections- [and] of those 20, just 7 were situations to which the federal protections would directly apply.” [quote]]

Regardless of the number of complaints, stronger protection for health care workers’ religious and moral beliefs has been a priority for conservative voters– who greeted the new Rule with excitement.

Detractors expressed concern that the Rule could prioritize health workers’ rights over the rights of patients, leading to discrimination against some patients, particularly women and people who identify as LGBT.

Those concerns led to three separate suits to stop the Rule’s implementation. The cases were combined for review in a Federal District Court in New York, which struck the Rule down in its entirety on November 6th.

The judge’s opinion found that the Rule was enacted without adequately following the procedural rules required by the federal Administrative Procedures Act, violates the US Constitution’s Spending Clause, and is also “coercive,” “arbitrary and capricious,” and in conflict with federal laws regarding employer obligations and the delivery of emergency care.

The Trump administration appealed the ruling on January 3rd, which will go to the U.S. Court of Appeals for the Second Circuit in New York.

This will be another case to watch in 2020- it could easily wind up on the US Supreme Court docket in the Fall.

The Affordable Care Act includes birth control benefits: such as a requirement that private health plans cover contraception, including counseling and sterilization, as part of their policies for 18 months with no out-of-pocket costs. More controversially, the ACA also requires employers to provide contraception as part of their insurance coverage offered to their employees.

The “Contraceptive Mandate” went to the U.S. Supreme Court in 2016 with the Hobby Lobby decision- the Court decided that closely held companies with religious objections did not have to comply with the mandate. The issue was back at the Supreme Court with the Little Sisters of the Poor case (2017), when the Supreme Court ordered the Trump Administration to reach a compromise with the Catholic order about their continuing objections to the law.

Partly in keeping with the Court’s order to compromise- the Trump administration announced new rules in 2017 that would allow most businesses to claim an exception to providing contraceptive coverage, including non-profit entities, for-profit companies, private colleges and universities, and other non-government employers.

On January 17th, the Supreme Court accepted the Trump Administration appeal of the 3rd Circuit opinion- we will have a 3rd Supreme Court opinion on the limits/constitutionality of the Contraceptive Mandate by the end of June.

Are there More Cases to Watch?

The three cases here are a small number of health care issues that will be decided– or appealed- in 2020. Here are more:

Add to these cases: a suit over the right of states’ to regulate pharmacy benefit managers, the continuing challenges to Medicaid Waivers (particularly work requirements), and the multiple cases surrounding the opioid crisis fall-out (including potential liability of the Sackler family) I am sure I am forgetting more…

2020 promises to be a year of many court decisions that could impact us all. Remember- this is only one third of the Federal Government!

I will be back with previews of 2020 for the Administrative Branch and Congress in my next Fontenotes. It’s going to be quite a year!

1. Federal District Courts are where federal cases begin- where an actual trial takes place- and there are 94 federal judicial districts (including at least one district in each state, the District of Columbia and Puerto Rico).

Appeals from these lower courts flow into 13 appellate courts depending on their location: 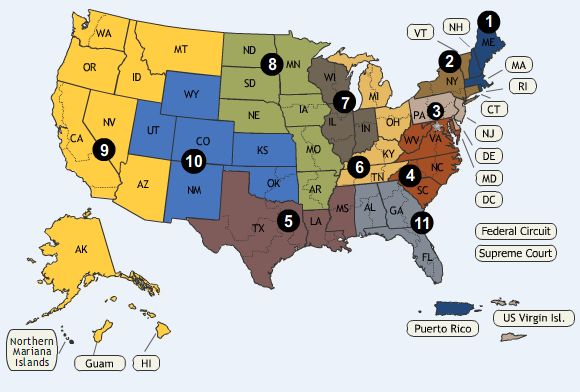