A very interesting thing is happening across the country- despite all the cries against “Obamacare”- states are deciding to expand Medicaid.

Louisiana reversed on this issue just this month, and in 2016 we may witness 3 more states flipping over to the original Affordable Care Act [ACA] plan of expanding Medicaid. Under the ACA Medicaid would unify who is covered (such as childless adults), and would raise the threshold for assistance to 138% of the federal poverty level (that’s a family of four living on an annual income of $31,000 or less).

Why would these states “give in” you might ask? And does this portend a move toward expansion by all states over time?

A word of warning: this issue is far too complicated to explain sufficiently in a brief manner. So this will be a longer and wonkier Fontenote than usual. I hope you will bear with me-

A fundamental component of the ACA design to achieve a well-insured population was the expansion of Medicaid nationally. This plan took a significant hit in 2012 when the US Supreme Court decided that Medicaid expansion could not be achieved through federal coercion; it had to be each state’s choice.

24 states said “NO!”– forgoing the proffered $423.6 billion in federal funds from 2013 to 2022 (to help states in this transition the law required the federal government to pay 100% of the cost of those newly covered lives for 3 years -2014 through 2016- reducing the federal share to 90% by 2020). These states argued that the increased costs were prohibitive, especially if the Federal Government backed off their commitment down the road.

More importantly, opt-out states also said that the expansion presented untenable questions about federalism and the role of the Federal government generally– an important subject that has raised ire on both sides of the argument since at least the days of Alexander Hamilton.

As a result, we have had a split country for 2 years [expansion started in 2014] with 26 states and D.C. offering increased access to Medicaid coverage– and 24 states operating under their old Medicaid rules.

Holding Firm?
Now at least 3 of those states are wavering on that stance, as demonstrated by this map from the always helpful Kaiser Family Foundation (get your own digital copy here.) 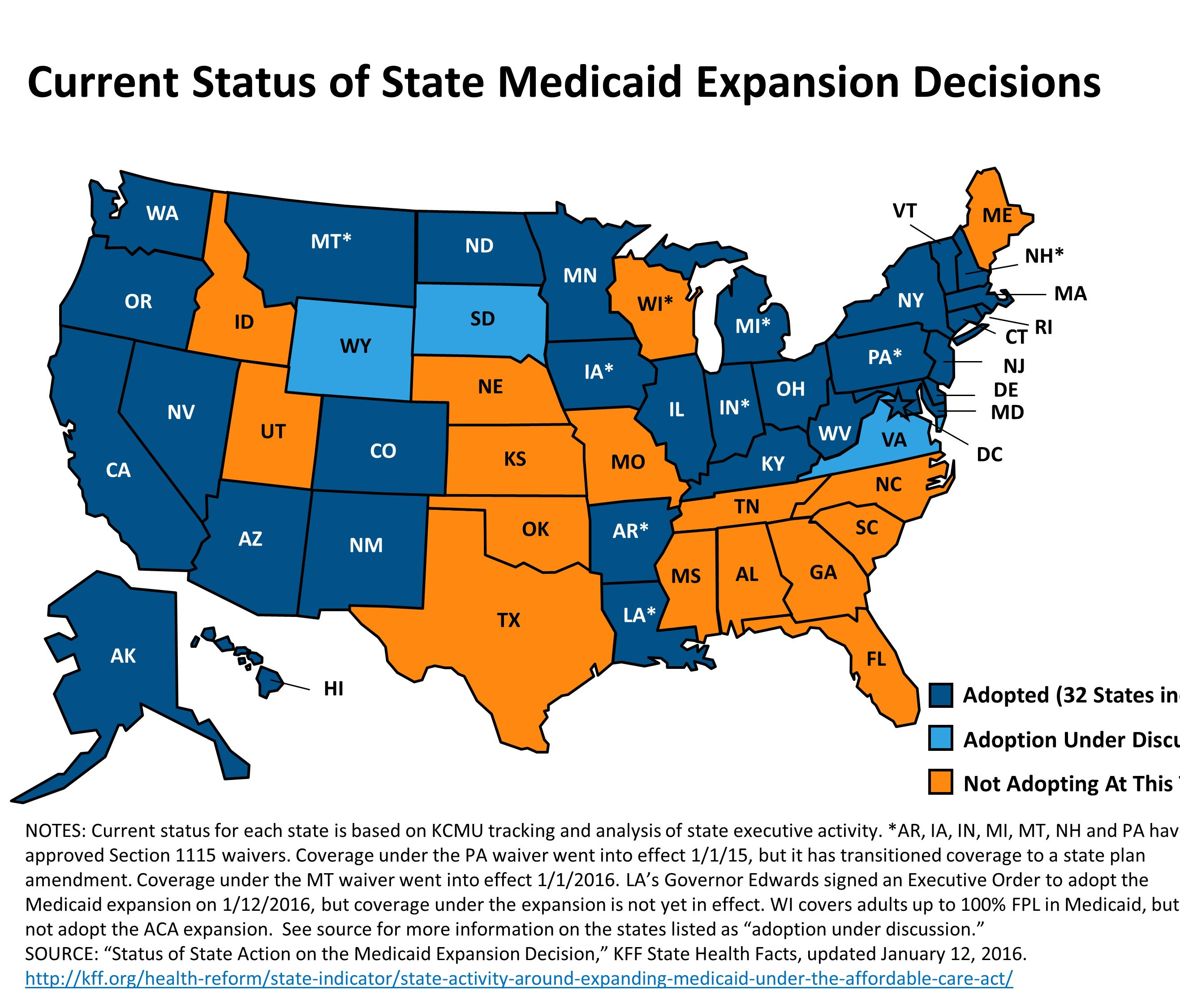 Actually, when this map was published last month there were 4 states in light blue- but as I already said the new Governor of Louisiana, on his first full day in office, announced that the state is definitely moving forward with expansion. “This is the right thing to do. This is not even a close call,” said Gov. John Bel Edwards.

But why are states switching? For the answer to that we need to look at the realities on the ground in states that expanded vs. those that did not.

Expansion v. Non-Expansion States
For the last two years the split between expansion and non-expansion states has provided an interesting laboratory to test the assumptions behind the ACA plan.
Four differences between the states are driving the renewed debate towards expansion:

So- watching Federal dollars flow to other states, loss of business opportunities, local hospital closures, high numbers of uninsured residents, and no improvement in health care outcomes (particularly in chronic conditions)- these are the forces that are making it increasingly difficult for states to maintain their resistance to the ACA.

Will the Trend Continue?
Heaven knows there are states that remain adamant in their refusal to participate in the “Obamacare” plan– arguably the most vocally in resistance is my home state of Texas.

Still- the possibility that all states may ultimately decide to expand is not out of the question, or out of the speculations of the press. This future becomes easier to envision when looking at adoption of past major legal frameworks by example: Medicaid was passed in 1965 but not fully implemented until the last hold-out state (Arizona) got on board in 1982!

Last but not least, the remaining states caught in the middle might find it easier to sign up as other “red” states find a way to do so (particularly Arkansas) in a manner that is more palatable to conservative beliefs.

And As A Final Push…
In the middle of all this swaying something happened last week that could very well push the remaining opt-out states even further to the brink.

In his 2017 Budget following his last State of the Union Address, President Obama offered what may be the ultimate carrot. Any state that decides to convert to Medicaid expansion can get the same 3 years of Federal support at 100% for 3 years– just like the original states did. The window that was due to close in 2016 has just been reopened for those states that expand- whenever that decision is made.

Medicaid Expansion: Stay Tuned!
2016 will be a very political year. The Presidential election promises to capture most of our attention, with predictable cries of “Repeal” and declarations of how “Obamacare” is ruining our country. But at the same time we may be hearing more states switch from “Hell No” to “Hello”. That may be the most interesting battle of the year.

Here is an excellent timeline on the evolution of Medicaid from the Kaiser Family Foundation.