Starting this week, the United States Supreme Court is more conservative than our country has experienced in decades.

Among the possibilities that swing in ideology represents is the prospect that the Court will do what the GOP controlled Congress has not been able to- defeat Obamacare.

What is the likelihood of that happening and when would it happen? Is the outcome of the next Constitutional challenge to the Affordable Care Act as foreordained as it appears now that Justice Kavanaugh can provide the crucial conservative 5th vote?

Will the Fourth Trip to the Supremes be the Charm?

The ACA has been in front of the United States Supreme Court three times: Zubik v. Burwell (2016) challenging the contraception mandate, King v. Burwell (2015), challenging subsidies to help people purchase policies on all the Exchanges, and NFIB v. Sebelius (2012) which questioned (among other things) the Constitutionality of the Individual Mandate.

The fourth challenge to the Affordable Care Act is currently bubbling up from District Court suits in Texas and Maryland. Will the law endure again?

What Are the Cases that Could Go to the Supreme Court?

Last December President Trump signed the new Tax Bill. Included in that legislation was the revocation of penalties attached to the Individual Mandate.

In February several GOP State Attorneys General (the number is now 20 States) filed a lawsuit (Texas v. Azar) in Federal Court in Ft. Worth, Texas, claiming that without the tax penalty the Individual Mandate is moot. Relying on the 2012 Court’s interpretation of the ACA in the NFIB v. Sebelius decision, the current suit argues that the destruction of the Individual Mandate renders the rest of the law legally invalid.

Oral arguments for the case began on September 5th.

In the meantime, the Justice Department chimed in on June 7th to say that although not in full agreement with the suit, the Trump Administration agrees that portions of Obamacare are no longer constitutional- in particular, the ACA protections for people with preexisting medical conditions. In a brief filed in the Texas case, Attorney General Jeff Sessions asked the Court to discontinue all ACA protections for preexisting conditions onJanuary 1, 2019.

The announcement that the Trump Administration would not defend against the Texas suit was not received well by the public. That announcement, more than anything else, has colored the public’s understanding of what is now commonly called the “Pre-Existing Conditions Suit.”

The Politics of Pre-Existing Conditions Protections

The protection offered by the ACA for people with preexisting conditions (estimated to be 52 million people) is one of the most popular parts of Obamacare.

Support for the ACA protections regarding pre-existing conditions has strong bipartisan support among voters. In a June poll, the Kaiser Family Foundation found that 76% of all voters say it is “very important” to save these protections. (Interestingly, the same survey showed that 60% of Americans live in a household where someone has one of these conditions.) 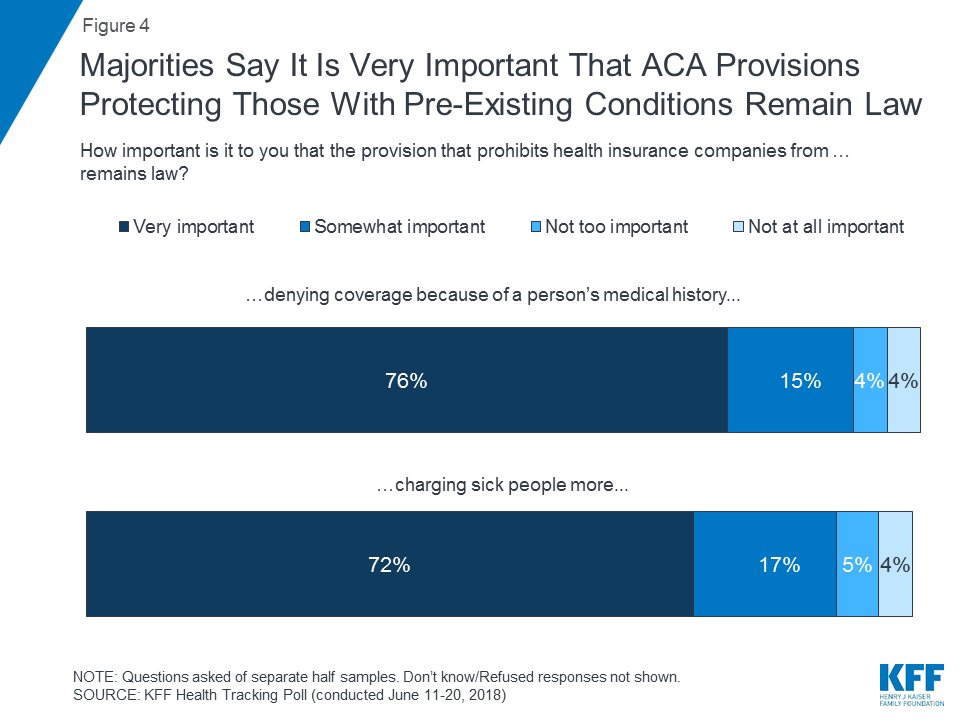 The politics around the issue of preexisting conditions may become more problematic for the GOP if the Texas lawsuit is successful. Kaiser predicts increasing instability in the insurance market, the Wall Street Journal reports the combination of the Texas suit and the Justice Department announcement could lead to fewer insurance company options, higher rates, inconsistent premiums, and people with increased difficulty obtaining coverage, and one commentator in Forbes– stating that successfully retracting protections “is not a trivial threat”– predicts it could significantly disrupt the insurance markets serving individuals, large employer-sponsored plans, and self-insured employers.

Not surprisingly, many Republicans in Congress (particularly those in tight midterm races) are pushing back from the Texas lawsuit. “Nominees in Missouri, West Virginia, Montana, North Dakota and Florida are all voicing their support through social media and op-eds for a health care plan that protects patients with preexisting conditions.” [quote] Mitch McConnell declared “Everybody I know” is worried about losing preexisting medical condition protections.

On August 23rd 10 GOP Senators introduced a bill to amend another law (HIPAA) to provide protections in case the ACA is struck down. More than two dozen patient groups have called this GOP alternative “insufficient” because “it would not ban pre-existing condition exclusions and would remove rating restrictions based on age, gender, tobacco use, or occupation.” The bill (ironically) would require that a person with a condition- say cancer- could buy insurance- but the insurance policy does not have to cover cancer care.

Who is Challenging the Texas Suit?

In the meantime, on September 13th a new front opened when the Maryland Attorney General filed a countersuit in the U.S. District Court for the District of Maryland, seeking a declaratory judgment from that court that the ACA is Constitutional and the Trump Administration “must stop trying to sabotage” the ACA. Maryland is not one of the 16 states currently fighting in the Texas court and represents a new challenge.

And that is where things start to head back to the U.S. Supreme Court, and it’s newly formed 5-vote conservative block.

The United States Supreme Court Will Have to Intervene

Texas v. Azar will probably result in a ruling against the ACA, if for no other reason than the trial court Judge (appointed by President George W. Bush) ruled against Obama Administration efforts in the past (such as when he blocked extended medical-leave protections to same-sex couples and denied gender-identity discrimination as a form of sex discrimination under the ACA). If that happens, the case will undoubtedly be Appealed and wind up in the conservative 5th Circuit United States Court of Appeals where the outcome is not guaranteed, but a decision against Obamacare is within reach. A Supreme Court showdown as the third and final step is highly likely.

The Maryland case, however, increases the probability that the U.S. Supreme Court will decide if Obamacare is Constitutional or not. If the Maryland Attorney General is successful in his countersuit, the Appeal will go the 4th Circuit United States Court of Appeals, where the outcome may not be as predictable, but is more likely to favor upholding the ACA. (Back in 2012 evolving challenges to the Individual Mandate that led to the NFIB v. Sebelius decision were struck down by the 4th Circuit Court for technical reasons.)

Here is the punchline- any time you have two different Federal Appeals Courts with opposite rulings on the same Constitutional issue the U.S. Supreme Court is compelled to take the case, especially on a matter of this magnitude. (Case in point: the NFIB case upholding the ACA resulted from a split opinion between the 11th and 6th Circuit Courts.)

One way or the other- I believe our newly constituted conservative Supreme Court will get its chance to reverse Obamacare in the next couple of years.

But Will the Supreme Court End Obamacare?

The nomination and confirmation of Justice Kavanaugh are now complete, but the searing debate we just experienced will rumble throughout the Fall, if not for years.

That confrontation revolved around many conflicts of opinion; lost in the furor was one of the initially raised concerns- that with a 5th conservative vote the Supreme Court will put an end to the Affordable Care Act. All they need is a case to give them the chance.

I am increasingly confident they will get the opportunity. But will they pull that trigger?

By the time the Supreme Court has this challenge to the Affordable Care Act in front of them, opponents to the law will have been fighting to kill it for more than 10 years. They have been disappointed by Congress (at least until now) and the Trump White House as well. “Obamacare is still the law of the land.”

But to those who think the success in placing Justice Kavanaugh in the 9th seat equates with the final exit from Obamacare I caution them to temper their expectations.

Without going into details- there are legal problems with the Texas case (an opinion that apparently Judge Kavanaugh “signaled in private meetings with Senate Democrats” when he was still a nominee).

Beyond that- even if the Texas Case can ultimately win uniform conservative legal support on its merits- will a vote to finish Obamacare make sense politically?

Personally, I think the evolution of the case in Texas (and Maryland), simultaneous with the swing in the Supreme Court is fascinating to watch- especially within the crucible of the political upheaval over protections for people with preexisting conditions.

Which will rule in the end? Conservative principles or political realities?

Will the GOP and conservative forces finally achieve their dream of killing Obamacare- potentially at their own expense? Or will the Affordable Care Act survive into the future not because it couldn’t be stopped- but because the opportunity came too late?

A Bit More on the Tax Bill: The Press and Public commonly believe that the December Tax Bill repealed the Individual Mandate itself: It did not. The GOP was forced to use Reconciliation to get the Tax Bill Passed because of their slim majority- and Reconciliation could not include a change to the ACA of that nature. For more on history, scope, and use of Reconciliation by both political parties go here.

Names Matter: I do try to present political issues with respect for both sides of the equation, so it is important to me to note that I do not use “Obamacare” as a derisive term- in fact, I never used it until President Obama did himself. For example, at the White House Youth Summit in 2013, he said (to laughter): “I know people call this law Obamacare and that’s OK. Because I do care. I do… I care about you. I care about families. I care about Americans.”