Have you been hearing about the national (and catastrophic) increase in the cost of insurance premiums on the marketplaces under Obamacare?

What if that wasn’t actually true?

What if the rates are actually going down in some regions- and in other areas remaining flat? Certainly there are markets that are showing significant increases- and that has to be hurting those populations a lot- But is that the truth everywhere?

Maybe your skepticism about the cost of a plan is based on your experience with your own rising premium? Would it be helpful to know there is something you are supposed to do that might actually bring that cost down?

I do not want to dismiss how difficult adding a new bill for insurance has been on many American families- new because they were uninsured before the ACA, or their employer is no longer insuring them, or they were covered by a job they lost.

For others the bill may not be new- but the premium is going up in a household where any increase of one bill makes another harder to meet the next. That is a stark reality.

But many talking heads on TV- as well as many politicians– would have you believe the cost of insurance is skyrocketing everywhere and for everyone- and that the insurance industry has been ruined by the Affordable Care Act [ACA].

So let’s start with a reminder about “the good old days.” As announced in a headline in USA Today back in June 5, 2014, Premiums grew average of 10% before Affordable Care Act. In fact- the double-digit rise in insurance premiums year after year was one of the primary reasons we got the ACA in the first place.

And the doomsday report on skyrocketing premiums is not new- we heard that all of last year, when in fact a report out of the Urban Institute showed that premiums for the cheapest “Silver” ACA plans rose only an average of 2.9% nationwide for 2015.

So what is the real deal on premium increases for this new enrollment period?? That depends on where you live.

Remember that the whole idea of a “marketplace” [or “Exchange”] was to provide information to people to facilitate side-by-side comparison of health plans. Every plan offered had to meet the minimal essential benefits dictated by the law- but there were still differences in plans [including price] that would allow a person to window shop their options. The competition that provided within the insurance industry was meant to bring the cost of insurance in check. And it has.

Do you find that hard to believe? Look at this excellent resource that was published by the Henry J. Kaiser Family Foundation on January 6, 2015: 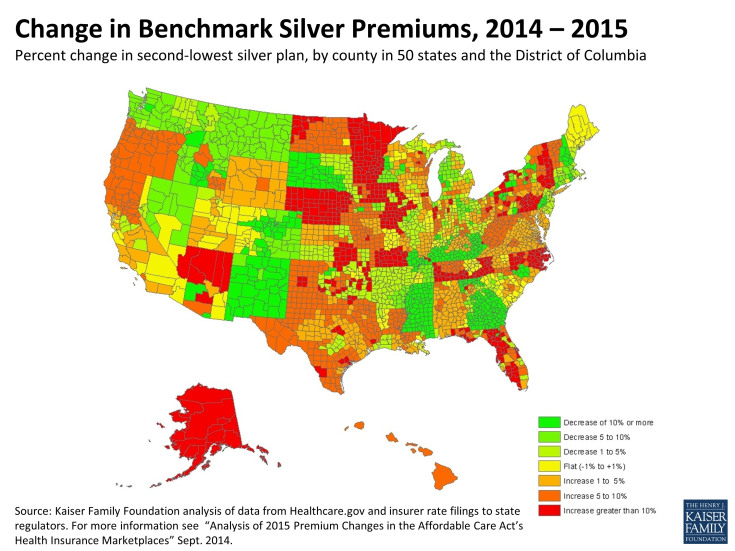 The accompanying article contains extensive information on a city-by-city basis.

Is that information too old? Perhaps- but Kaiser renewed their research just one week ago [Oct. 26th] and found that trends by region still show vast differences- such as a price decrease of 10.6% on average in Seattle, but a whopping 38.4% increase in Nashville!  (Again- the article has extensive breakdowns by city if you are interested in checking your own neck of the woods.)

What accounts for these dramatic differences between locations?

There are undoubtedly many factors that an economist could explain to you- but I will give you one answer: competition. The more active the shopping is on an exchange- the more the prices are supposed to drop. That was- again- the whole point.

No one should take my word for anything involving math- but you might be interested in the predictions of Deloitte (2013) on how the exchanges would act over time. And it turns out they were right.

Which brings me to the point I want to make for those of you who are personally facing an increase in your premium. I know- it sucks. But have you gone shopping?

It was (apparently) the expectation of the ACA that Americans would anticipate each annual enrollment period as a great opportunity to find the best deal on insurance- everyone would go back to the Exchanges to shop in a virtual insurance Black Friday phenomenon.

The problem is most of us are passive recipients of insurance- we aren’t used to sticker shopping. But guess what! If you go back to your Exchange and update your information you just might do better than your current plan is offering.

And yes- that might mean you have a different carrier every year. But if they offer a better price, why wouldn’t you jump?

Does shopping your marketplace sound like a boring thig to do? Would you go back to the Exchange and shop if I told you that according to a recently released analysis by HHS 8 in 10 people who shop around find a better price for a similar plan on the marketplaces- with people commonly saving $400 a year?

As consumers keep going to the exchanges more companies are participating. And they are stepping up: according to a study of 35 states there were an average of 3.5 insurers per county on HealthCare.gov in 2015, up from 2.6 the previous year. The more companies that participate- the lower the prices… the more shoppers on the Exchange- the more insurance companies participate.

In a very simplistic reminder of how a Free Market works- our activity as purchasers dictates our prices. There is a reason the Exchanges are called “Marketplaces.”

So- if your company just sent you a notice of an increase for next year- even a small one- go shopping! It is at least worth a look…

In the meantime- I envy you if you are in one of the green spots on the map- and I certainly hope you are not in a red one. But either way- rather than bemoan the uptick we all need to be shoppers to drive costs down. For ourselves as well as for the country.

And please… let’s remind our politicians that annual increases of double-digit premium increases were NOT “the good old days”!

Please! Forward this to your elected representatives. I would love to hear what they say…

What Does This Mean?

Do you find insurance hopelessly confusing? You are certainly not alone.
According to Reuters many Americans [like A LOT of Americans] do not know what a deductible is – or how a deductible differs from a premium.

What is a premium?
“The amount that must be paid for your health insurance or plan. You and/or your employer usually pay it monthly, quarterly or yearly.” [also healthcare.gov]